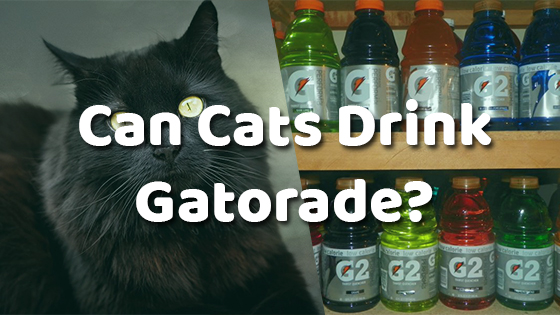 Can I Give My Cat Gatorade?

One of the most popular beverages among athletes, from eight-year-old soccer players to marathoners in their thirties, is Gatorade. After all, this sports drink is formulated specifically for those of us who are most active—it’s full of energy, electrolytes, and the fluids we desperately need to stay hydrated. But, of course, this sweet drink isn’t only consumed by athletes. When people are dealing with food poisoning, colds, or gastrointestinal bugs, many of them rely on electrolyte-replenishing beverages like Gatorade to provide some energy and ensure proper hydration. Most people consider this to be safe for kids and adults alike in the short-term.

People aren’t the only ones who have to deal with the occasional gastrointestinal upset. Whether it is due to medication side effects, eating bad food, or catching a pathogen from another animal, many cats deal with symptoms like vomiting, diarrhea, and dehydration a few times in their lives. So, should we give this stomach bug remedy to our pets, too? Is Gatorade a good way to give your cat some energy to get through their illness? Can cats have Gatorade?

The answer is yes, cats can drink diluted Gatorade, but only for a short period of time and only if your veterinarian approves. There is nothing in Gatorade that poses a poisoning risk to your cat, so there is no reason to panic if you catch them lapping bright blue sports drink from a puddle off the kitchen floor. The energy and electrolytes in this beverage can help support your cat’s depleted body through a stomach bug, too. Just make sure that you put them back on solid food once they can stomach it.

Benefits of Giving Your Cat Gatorade?

So, what are the reasons you may want to give your cat Gatorade? Generally, this beverage is only recommended under special circumstances that result in dehydration. Some situations where your cat may benefit from drinking Gatorade include periods of vomiting or diarrhea, fever, kidney problems, large or severe injuries, surgical recovery, shock, or heatstroke. Of course, if you suspect your cat is dealing with any of the above, you should seek your vet’s advice before you try to treat their symptoms with Gatorade. Severe dehydration often requires IV fluids to treat.

Sports drinks like Gatorade have been designed specifically for the purpose of rehydrating and nourishing a body depleted after prolonged exercise—which means they can be a useful beverage for a body depleted due to illness, too. Gatorade is mostly water, several types of sugar (for fast, easy energy), salt, and potassium.

In most situations, sugar is a terrible idea for your cat, but during periods of illness, moderate amounts of the simple sugars in sports drinks may actually benefit their health. This is especially true if your cat is vomiting or refuses to eat solid foods. Though cats require protein, fats, and other nutrients found in meat to thrive in the long term, the sugar content of Gatorade can provide the raw energy they need to combat whatever pathogen is making them ill. Sugar is by no means a good source of nutrition for cats, but it will ensure that their poor, sick bodies are not left running on fumes.

Illness which causes symptoms like vomiting and diarrhea also deplete the body’s electrolyte supplies, which can be deadly. The electrolytes in Gatorade can help replenish your cat’s electrolyte levels, keeping the fluids in their body balanced and allowing all of their organs to function properly.

Though Gatorade can be helpful in the short term, it should not become your cat’s go-to beverage. Prolonged Gatorade consumption is likely to cause your cat all sorts of health problems, including obesity. Because sports drinks are high in calories and low in nutrition, they are likely to contribute to weight gain that can eventually lead to obesity. This weight gain, combined with the spikes in blood sugar, can lead to diabetes in the long term, which can have life-threatening complications.

Another thing to look out for is the salt content. While your cat is unlikely to suffer from salt poisoning after drinking Gatorade for a few days during a period of illness, drinking it regularly for an extended period of time is likely to disrupt the sodium balance in their body. This is a condition called hypernatremia, which can be fatal. Symptoms include extreme thirst, confusion, clumsiness, behavioral changes, and seizures. To head off all of these problems, just make sure your cat only consumes sports drinks in special circumstances and under the guidance of a veterinarian.

Though Gatorade should not be a regular addition to your cat’s water dish, there is no reason to panic if you catch them licking it off the floor, and it may even be helpful to cats who are struggling with dehydration due to illness or injury. To ensure your cat’s safety, dilute the Gatorade before serving, and take them to the vet if their symptoms worsen.