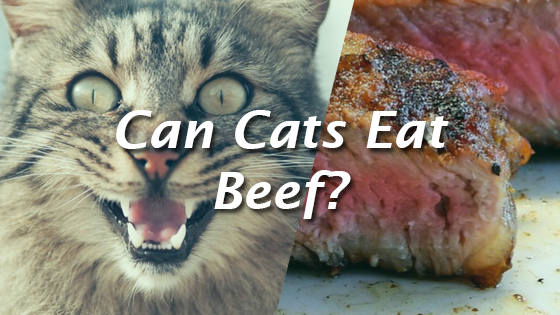 Can Cats Have Beef?

Though not quite as frequently consumed as chicken, beef is one of the most popular meats in the United States. Most of us who follow the Standard American Diet eat beef at least several times a week, if not multiple times per day—it shows up in burgers, pastas, sandwiches, hot dogs, casseroles, and countless other dishes. Whether your favorite dish at a restaurant is spaghetti with meatballs, sirloin steak, or even an appetizer like loaded nachos, there is a good chance that it contains some sort of beef product. We are positively addicted. In the year 2013 alone, Americans ate 36,882,737 cows!

In recent years, health-conscious individuals have begun to limit their beef consumption; the World Health Organization recently classified red and processed meats as a known carcinogen, more and more people are learning to watch their cholesterol and saturated fat intake, and poultry and fish have become more popular among those who watch their waistlines. Even so, the vast majority of Americans have beef in their homes regularly. For Americans who have cats, all the recent concerns over beef have created some confusion. We’ve heard that we should limit our saturated fat intake, but what about our cats? Aren’t cats supposed to be predators? Are they immune to the carcinogenic effects of red meat? Can cats have beef?

The answer is yes, cats can consume fresh beef in moderation. While it is true that wild cats certainly did not eat the flesh of domesticated cows, there is nothing innate in beef that would harm your cat’s health in small quantities: cow’s meat is not at all poisonous to cats, so there is no risk of toxicity if you decide to drop a couple chunks of steak into their bowl. Cooked beef is probably one of the safer meat options for your cat—it has a lower risk of contamination by parasites than meats such as pork and fish. Just make sure to give fresh, cooked beef to your cat only in moderation, because this fatty, caloric food can contribute to obesity.

Cow’s meat is pretty similar to other meats, so it contains many of the vitamins, minerals, and amino acids that your cat’s body needs in order to run properly. Our doctors often tell us to limit our red meat consumption, but beef can be quite nutritious for cats. This is because cats, unlike people, are obligate carnivores—their bodies are designed to consume almost entirely meat-based diets! In the wild, cats would get almost all of their calories from the bodies of whatever prey animals they needed to catch and kill. For the most part, they would only eat plant foods when they gobbled up the guts of herbivorous prey animals.

Humans, on the other hand, are omnivores who do not have the same adaptations for a meat-heavy diet. While humans certainly can and do eat meat, we also tend to be more vulnerable to its risks, such as cancer and heart disease. In terms of meat-munching prowess, human bodies can’t match feline biology.

By the same token, feline bodies are nowhere near as good at processing plant foods as human bodies. This is why savory animal foods like beef are considered by many to be excellent treat foods for cats. When we celebrate our birthdays, we tend to turn to sugar-laden, carbohydrate-rich foods like cake and cookies. Cats, who can’t even taste sweetness (really!) would be far happier with a small piece of fresh, cooked beef.

It would be more nutritious for them, too. Beef does not have any carbohydrates, making it more suitable for cats than most of our favorite treats. A slab of cow’s flesh is all protein and fat, which are the macronutrients that cats handle the best.

Meat contains large amounts of ‘complete’ proteins (which have all of the amino acids that the carnivorous feline body requires) that can help keep cats strong and healthy. Amino acids are used to create every part of your cat’s body. For cats who are growing, physically active, or recovering from injury or surgery, protein-rich meats like beef may be helpful dietary supplements while they build and repair muscle, skin, fur, and nails.

Beef also contains large quantities of Vitamin B12, iron, zinc, niacin, and selenium, which are necessary for cat health. Because your cat is a carnivore, they will be able to absorb the nutrition in beef more efficiently than they would be able to get it from plant foods. The heme iron in a piece of beef will be far more beneficial to your cat than the nonheme iron in a bowl of fresh spinach leaves.

Still, experts would not go so far as to say that beef was a health food for cats. The fat content in beef varies widely based on its cut and its quality. If you want to give this food to your cat, it is important to pay attention to its fat content—though cats are not nearly as prone to heart disease as we are, they can still develop serious health problems if they consume too much saturated fat from fatty beef. Giving your cat too much fat can increase their risk of high blood pressure, heart attack, or stroke.

Beef is also quite high in calories compared to many other ‘people foods’. If you use beef as a treat or a dietary supplement, it is important to cut back on their kibble to make up for the additional calories. It is even more important to understand that beef is not a substitute for cat food—if you put your cat on an all-beef diet, they will develop deficiencies and grow ill.

In conclusion, beef is a safe food for most cats to eat in moderation. It is nontoxic, usually well tolerated, and loaded with minerals and amino acids that can provide a nutritional boost for recovering or active adult cats. Just remember that beef is a treat or a supplement, not a dietary staple; too much of this fatty meat can cause health problems and nutritional imbalances.

2777 Views 1 Views
Tagged in:can cats eat beef, can cats have beef, can I give my cat beef