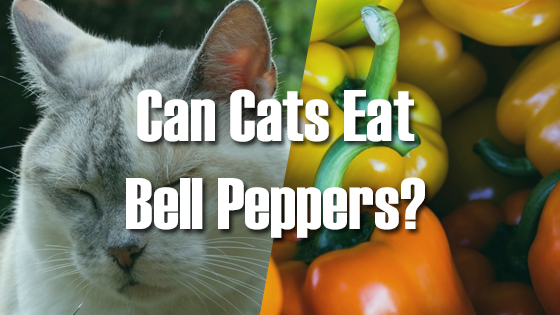 Can I Give My Cat Bell Peppers?

Though maybe not one of the most popular vegetables to snack on raw by itself or dipped in hummus, the colorful, crunchy bell pepper is nevertheless one of the most common vegetables found in the average American diet. Bell peppers are a common fixture in vegetable trays, as well as cooked into dishes such as soups, fajitas, burritos, stir fries, pastas, and, yes, even pizzas. Stuffed bell peppers, too, are a common feature on many a restaurant menu or weekly meal rotation. Regardless of whether you prefer yellow, green, red, or orange bell peppers, you probably consume them at least semi-regularly.

Because these colorful vegetables so frequently make their way into our kitchens, our cats have plenty of opportunities to get their paws on a couple slices. Is this a good thing? A bad thing? Can cats have bell peppers?

The answer: yes, your cat can eat bell peppers in small amounts. It is true that your feline friend is unlikely to enthusiastically devour an entire bell pepper behind your back, but even if they do, there is no need to fret—this food does not appear to carry any real risk of toxicity for either cats or dogs. It is important to realize, however, that feline digestion is not well suited to eating large amounts of plan foods. If your cat has a soft spot for bell peppers, use them as a treat, but do not serve in excess. 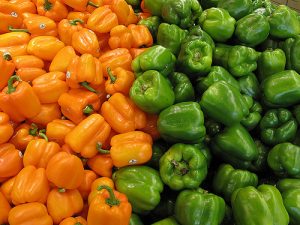 Bell peppers and other vegetables are considered to be among the healthiest foods for people, so it is easy to assume that the same thing holds true for our pets. While some believe that small amounts of veggies can improve feline health in the long term, unfortunately, vegetables will not have the same powerful health benefits for cats that they do for us. Humans seem to be well suited to omnivorous diets, but our cats are obligate carnivores.

Their dietary rules are right there in the name: your sweet little Siamese is ‘obligated’ to be a carnivore. Our housecats share a common ancestor with big cats like lions, cheetahs, and tigers, and, just like their wild cousins, they have evolved on a diet that consists almost exclusively of whole prey animals. Several million years of meat-munching has had quite an impact on the way their digestive machinery is set up. While humans have a whole host of biological equipment to help us pull nutrients from plant foods, our cats simply do not.

Many of the vitamins, minerals, and amino acids in plant foods like bell peppers fall into one of two categories: either they are useless because the cats produce them on their own, or they are present in a form that cat bodies are unable to absorb properly. Bell peppers may work wonders on our health, but our cats can’t get a whole lot out of them.

That’s not to say that there is absolutely nothing to gain from giving your cat bell peppers. Like most crayon-colored vegetables, bell peppers are very high in antioxidants, which may help keep your cat healthy in the long term. Many antioxidants come in the form of vitamins (such as Vitamin C) that cats may or may not need to meet their daily dietary needs. Their antioxidant properties, however, go beyond simple nutrition.

Antioxidants have the power to destroy highly charged, highly reactive particles called free radicals. Free radicals are always present in the body—they are waste products produced by many normal metabolic processes—but they can do a lot of damage. Free radicals have a nasty habit of damaging any cells that they come into contact with. This damage often results in mutations that are thought to lead to diseases like dementia, arthritis, and even cancer. Some scientists believe that free radicals are entirely responsible for the physical and psychological decline associated with old age.

The antioxidants found in bell peppers can destroy these free radicals before they have a chance to damage body cells, which helps lower the number of potentially dangerous mutations in the body’s cells. There have not been many studies performed on cats, but human studies have found that eating antioxidants in whole foods yields much better results than taking antioxidant supplements. This would suggest that, if you’re looking to up your cat’s antioxidant intake, colorful plant foods like bell peppers are a much better option than antioxidant pills.

The drawback: cats often struggle to digest plant foods, so felines who consume too much bell pepper may struggle with upset stomach, vomiting, or diarrhea. If your cat becomes ill after eating bell peppers, reduce their portion size or opt for a more easily digestible vegetable.

While bell peppers should never serve as a large part of your cat’s diet, they are considered nontoxic and perfectly safe to give to felines in moderation. These low-calorie, high-antioxidant vegetables are unlikely to cause weight gain and may help protect against diseases that are exacerbated by free radical cell damage.