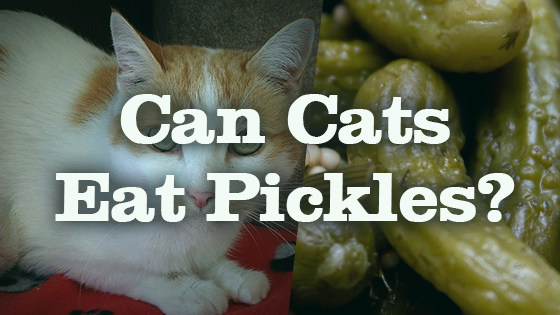 Can I Give My Cat Pickles?

Most people either love pickles or hate them, but those who love them will insist that pickles are among mankind’s greatest inventions—right up there along with the wheel, vaccines, and even the Internet. Pickles can be eaten on their own, sliced onto sandwiches and burgers, mixed into pasta salads, or even wedged between two crackers with a dollop of hummus. Even the most health-conscious of us—health food nuts and anxiety-ridden parents alike—are okay with eating pickles and sharing them with our families. After all, pickles are whole foods! Pickles are fun, unique, and interesting. As long as there is enough to go around, we are happy to share.

But can we share pickles with our four-legged friends? Can cats have pickles?

The answer to this question may surprise you: no, cats should not eat pickles. While you have no reason to panic if your cat gobbles up a stray pickle slice off the floor, you should resist the temptation to give this food to your cat intentionally. Even though pickles themselves are not toxic to cats, they can be dangerous for several reasons. This is one food you should keep away from Fluffy’s food dish.

Why You Shouldn’t Feed Your Cat Pickles

Though we like to proudly declare that we ate our vegetables after gobbling up several pickles, the reality is that pickles are not a health food. There are no potential benefits to giving your cat pickles, because the risks outweigh the measly nutritional content.

Most people know that pickles are cucumbers. As such, they do contain small amounts of Vitamin C, beta-carotene, and manganese. Unfortunately, cats are obligate carnivores, which means that the vitamins found in plant foods like pickles are not readily available for absorption. To make matters worse, these nutrients are largely useless in the feline diet!

Unlike humans, cat bodies synthesize Vitamin C on their own— unless their bodies are compromised by age, illness, or extreme stress, they do not need dietary sources of Vitamin C to meet their daily needs. Beta-carotene, on the other hand, is useful to human bodies because we use it to make Vitamin A. Our cats are incapable of using beta-carotene to synthesize Vitamin A efficiently. The only way they can meet their Vitamin A needs is to eat it already formed in the flesh of prey animals who do the synthesizing for them. This all means that even unprocessed cucumber slices are mostly useless to your cats, who would benefit only minimally from the tiny boost in vitamins.

Perhaps one of cucumber’s strongest points is nonexistent in its pickled companion: the hydration factor. Cucumbers are among the most hydrating vegetables readily available in our supermarkets—they are made up of over 90% water. Pickles, on the other hand, can contribute to dehydration and throw the balance of fluids in the body completely out of whack. There is a reason why many people experience excessive thirst, water retention, and other bizarre fluid-related symptoms after eating too many pickles.

The component of pickles that causes dehydration is the one that makes them an unsuitable food for our cats: salt. While humans can tolerate the occasional binge of salty food, our cats, who are much smaller and less accustomed to added sodium, can’t handle nearly as much of it. One small pickle contains, on average, eight times the feline daily limit for sodium. This means that it doesn’t take very many pickles before the salt content becomes a problem. In addition to raising your cat’s blood pressure (which may exacerbate existing cardiovascular problems), eating too much salt can cause a potentially fatal condition called salt poisoning.

Finally, many pickles are pickled in juice that contains garlic, which is extremely poisonous to cats. While the amount of juice on the skin of a couple pickle slices may not hurt them, it’s best to minimize your cat’s exposure to garlic whenever possible. Even feeding your cat small amounts of garlic over an extended period of time can result in potentially fatal anemia.

So, while you may love to share pickles with your family at picnics and parties, you should resist the impulse to share with your cat. The salt that makes pickles so delicious is extremely harmful to cats, who can’t handle nearly as much sodium in a day as we can. To avoid the risk of salt poisoning, opt for other, more cat-friendly treats, like sliced apples, bananas, or cooked vegetables. Your cat will thank you.