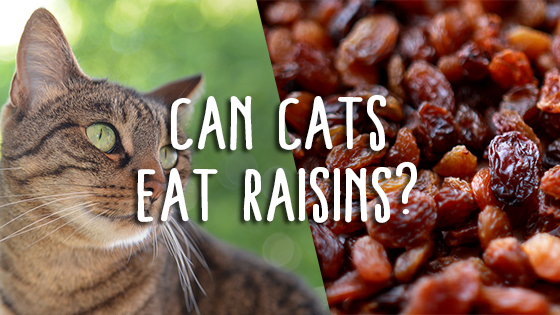 Can I Give My Cat Raisins?

A favorite healthy snack in many family’s households is dried fruit—specifically grapes, which make their way into trail mixes, oatmeal blends, cookies, and even salads. Some of us even like to eat the sweet, chewy little fruits all by themselves! Though we know to look out for added sugars that may make them even sweeter, we generally consider raisins to be health-boosting, body-nourishing fitness foods. Their portability and ease of preparation (read: lack of preparation) make them the perfect ‘fast food’ for many families.

But many families also have children of the furry variety, and their needs need to be considered, too! Though we know raisins are great treats for our kids, what about our cats? Can cats have raisins regularly? How about as a rare treat?

No, you should not feed your cat raisins—not as a treat and certainly not as a staple. These fruits may offer some health benefits for us, but for cats, they can be highly toxic. Grapes should be avoided, too. While your cat eating a single raisin off the floor is unlikely to result in life-threatening poisoning, making a habit of feeding your cat raisins may result in serious, life-threatening health problems. Even eating more than two or three raisins in a sitting warrants a visit to the vet’s office.

Why Raisins are a Bad Idea

This should not be terrible news, because there are no potential benefits to feeding your cat raisins anyway! The vast majority of cats don’t even like the wrinkly little fruits, which is part of why poisoning is so rare. Your cat isn’t very likely to break into your box of raisins and gobble them up eagerly. Raisins, and most fruits, offer little nutritional benefit to cats. 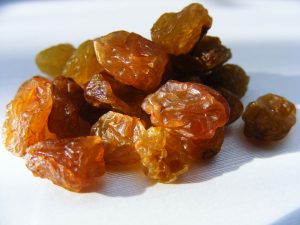 We’re used to our doctors telling us to pack more fruit into our own diets, but when it comes to cats, less may be more. This is because cats, unlike omnivorous dogs, are obligate carnivores. Obligate carnivores have evolved in such a way that all of their nutritional needs are most efficiently met by eating meat. Millions of years of eating nothing but meat has rendered cats and other obligate carnivores dependent on it—unlike omnivores or herbivores, cats can no longer synthesize certain vitamins and amino acids, so they must get these nutrients by eating the flesh of other animals.

This inability to synthesize certain nutrients using the chemicals found in plants makes plant foods, including raisins, nearly useless for cats. Even most nontoxic fruits are, at best, empty calories when it comes to a cat’s diet. Cats need high protein diets. As a species, they have actually lost the ability to break down carbohydrates the same way that we do. From a dietary perspective, feeding a cat fruit is a lot like feeding a person grass: useless and maybe a little uncomfortable.

The reasons behind raisins’ toxicity are not readily understood, but there has been enough illness and death to place this food firmly on the list of forbidden foods. There is a chemical in grapes that seems to cause kidney failure in cats and dogs—and, because raisins are just dehydrated grapes, they contain this chemical in even higher concentrations than fresh grapes. Understanding the mechanism behind the poisoning is made even more difficult by the fact that some of the cats studied seem to experience no negative effects. This means that some cats will suffer immediate kidney failure after eating a handful of grapes, while others can gobble up raisins and carry on without an issue. Since we don’t understand why this is, the safest decision is to avoid feeding your cat raisins and grapes altogether.

If you suspect that your cat has eaten raisins, it’s important to monitor them for several days. While some cats will immediately start expressing symptoms of poisoning, others can take several days before sickness sets in. Most often, the first symptoms of raisin toxicity are vomiting, diarrhea, loss of appetite, physical weakness/shakiness, low energy, stomach pain, behavioral changes, and excessive yowling or ‘crying’. If the raisins have damaged your cat’s kidneys, your cat might stop urinating, drink excessively, or urinate more frequently than is normal. If left untreated, raisin toxicity can lead to seizures and death, so take your cat to the vet immediately!

Despite their popularity as a healthy snack food for us humans, raisins are best omitted from our cats’ diets. Our cats are obligate carnivores who do not need to eat fruit to meet their nutritional needs, which makes the humble raisin an ultimately nutritionally empty food. In addition, raisins are extremely toxic to some cats, and may result in rapidly-progressing kidney failure, which can be fatal. While some cats seem to be able to handle raisins, if you suspect that your feline friend has eaten more than two or three of them, it may be wise to contact your veterinarian for further instruction.