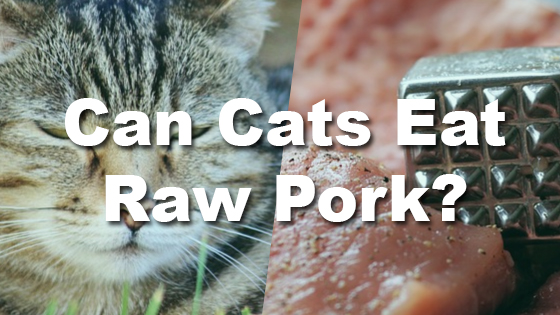 Can I Give My Cat Raw Pork?

Though few of us would list it as our favorite meat (that title probably goes to beef, chicken, or seafood), pork is a staple in the Standard American Diet. The quintessential American breakfast, though notoriously unhealthy, relies on greasy bacon to provide a patriotic heart attack with a side of deliciousness. Even if we’re not chowing down on bacon and eggs or BLTs, we often find ourselves eating pork in other ways: deli ham appears in many grab-and-go sandwiches, ham and cheese make a popular party food, and pork ribs are a common dinner option to celebrate special occasions or summer barbecues.

People eat a lot of pork. We probably know that we shouldn’t let our cats eat BLTs for lunch every day, but what about other pork products? Since cats are carnivores, it seems like meat would be one of the best people foods we can give them. If you follow the ‘natural is better’ line of thinking, you will eventually come to the following conclusion: pork is great for cats, and raw pork is even better! After all, wild cats do not skin, season, and cook pork flesh before eating it. Your housecat’s wild cousins eat raw warthog for breakfast. So, can cats have raw pork?

The answer is no, cats should not consume raw pork—or any raw meat, for that matter. Because cats are obligate carnivores who have evolved to eat mostly whole prey animals, pig flesh in and of itself is generally considered safe for cats in moderation. Small amounts of cooked pork are safe, even nutritious, treats for healthy adult cats, but raw pork is a health hazard, and cats should not be allowed to eat any amount of it. If you feed your cat uncooked pig meat, you are putting them at risk of food poisoning that may be severe or even life-threatening. 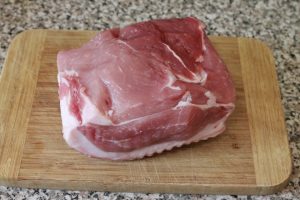 As whole foods go, pork is one of the most nutritionally dense you could give to your cat. Unlike people and dogs, cats are obligate carnivores who have evolved to eat meat almost exclusively—this means that animal foods, including pork, are going to provide more necessary nutrients than plant foods. Even human superfoods like kale, spinach, and blueberries pale in comparison to the micronutrients available in high quality meat.

Whereas people often thrive in a diet high in plant foods (which is why the vegetarians among us tend to fair just as well, if not better than, those who follow the Standard American Diet), cats lack a lot of the biological equipment necessary for processing fruits and vegetables. There are some nutrients humans synthesize on our own that cats must consume in their preformed states. Two great examples, which are only found in meat foods, are Vitamin A and the amino acid taurine.

The risk of taurine deficiency is the primary reason why many cats struggle with vegetarian diets. Taurine is used throughout the body, but it is found in particularly large quantities in areas such as the retinas (in the eyes), the heart muscle, and the central nervous system. If your cat develops a severe taurine deficiency, they may develop heart failure, blindness, or other nervous system problems.

Though it is not a great source of Vitamin A, lean pork is an excellent source of the protein that provides all the amino acids your cat needs to thrive, including taurine. This makes cooked pork a nutritious treat for active or growing cats who may need a little extra protein to stay strong and fit. Feeding your cat cooked pork on occasion can boost their taurine intake, but you should not rely on ‘people food’ to meet any of your cat’s dietary needs. Without the careful guidance of a veterinarian, your pet should be eating mostly fortified cat food.

Cooked pork is safe and even healthy for adult cats, but raw pork is dangerous. This has nothing to do with the meat itself—cats are predators who can digest raw meat just fine—but with contamination. Most pork comes from factory farms, where pigs are kept in large numbers in unsanitary conditions. Raw or undercooked meat is a petri dish full of bacteria and parasites that can make your cat seriously ill.

Contrary to popular belief, freezing DOES NOT kill these pathogens; the only way to kill parasites and bacteria like E. Coli, salmonella, and Listeria is to cook meat thoroughly before feeding it to your pet. Ingesting large quantities of these bacteria can lead to loss of appetite, depression, vomiting and diarrhea (which can cause dehydration), rapid heartbeat, muscle weakness, extreme fatigue, changes in body temperature, and even death. If you suspect that your cat has been poisoned as a result of eating undercooked meat, contact a vet.

In conclusion, cooked pork is safe for cats, but raw pork is a health hazard that should be avoided. Keep all uncooked pork away from your cat, and, if they accidentally eat some, watch closely for signs of foodborne illness.