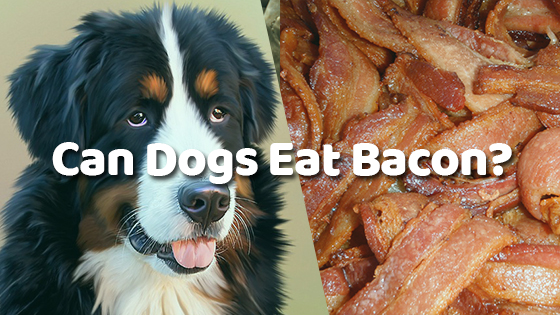 Can Dogs Have Bacon?

In the 21st century, most of us understand that bacon is the antithesis of a health food. It has secured a spot in popular culture as the King of Sinful Foods, the ultimate indulgence, the so-bad-but-so-good breakfast food that often sits at the top of our ‘consume in limited quantities’ list. In recent years, bacon’s status as the unhealthiest food has only increased as we become more aware of the negative effects of animal products on our overall health.

But what about dogs? Dogs, after all, are the meat-munching descendants of wolves, who live solely on bloody chunks of meat. That would lead many to believe that all meat is fair game. Is bacon any better for dogs than it is for us? If not, is it safe to feed it to our dogs in moderation?

Can you give your dog bacon?

The answer: a resounding no. While many of us choose to incorporate small amounts of greasy, crunchy bacon into our otherwise healthy diets, we should not model our dogs’ breakfast habits after our own. This is one naughty food that should be completely off limits for all dogs. Your dog may come running at the rich, fatty smell of frying bacon wafting through the early morning air, but you will be doing them a favor by ignoring their begging.  Even using bacon as a ‘rare treat’ is not advisable.

This is not because bacon is toxic to dogs, per se—a single serving of bacon will not result in seizures, liver or kidney failure, or shock—but rather because of the negative health effects it may have on their long term health. Bacon is loaded with salt and unhealthy fats which can easily damage canine health. 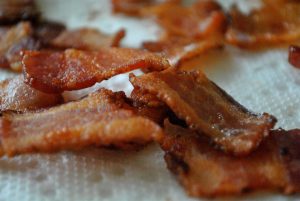 Though your dog’s wild ancestors wolfed down pounds upon pounds of fatty meat, your Labrador is not equipped to eat tantalizing strips of fried pig fat—in fact, there are no health benefits to feeding Fido a piece of crispy bacon. Bacon is ultimately a nutritionally empty food, lacking in almost all the vitamins and minerals necessary to support your dog’s health. Though bacon does contain some protein, which is important for building and maintaining muscle, there are far safer and more efficient ways to ensure that your dog gets all the amino acids they need.

As a nutritionally empty food, one of bacon’s most obvious negative health effects is its potential for resulting in weight gain. It is very high in fat and calories, but it does not provide any of the nourishing vitamins and minerals that the body needs to thrive. In addition, bacon is a low-volume, low-fiber food, so it will do little to satiate your dog’s appetite. So, if their high-calorie bacon breakfast is not enough to satisfy them, they will be more likely to overeat. Overweight dogs, just like overweight people, are at an increased risk of all sorts of potentially life-threatening health problems.

But bacon can do worse than put a little pudge on your pug. The biggest health risk of incorporating this high-fat food into your dog’s diet is pancreatitis. Pancreatitis, which is found in humans as well as dogs, is the result of eating too many rich, high-fat foods. Fatty foods can cause painful swelling in the pancreas, which is responsible for producing insulin and other enzymes required to properly digest food. Pancreatitis can be mild or severe, but unfortunately, many pet owners do not notice the signs until the disease becomes life-threatening.

Symptoms of pancreatitis include abdominal swelling and pain, depression, low energy, poor appetite, vomiting, fever, and diarrhea. If left untreated, it can also cause deadly heart arrhythmias, hemorrhaging, labored breathing, and even sepsis, which is often fatal. Cases of acute pancreatitis, when treated early, are often treated through proper hydration, nutritional support, pain relief, and a diet very low in fat. If left untreated, the illness may turn into chronic pancreatitis, which often results in diabetes or a deadly disease known as maldigestion syndrome. Both of these illnesses require difficult, expensive lifelong treatment, and often shorten a dog’s lifespan. 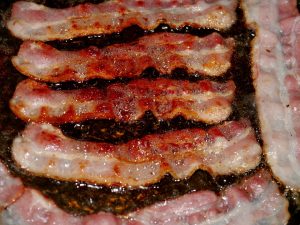 Cooked bacon is high in salt, too, which can be especially dangerous for large breed dogs. Dogs who eat too much salt may suffer from ‘bloat.’ This condition causes the stomach to twist, squeezing the esophagus shut. This, too, can cause death due to low blood pressure, a ruptured stomach, sepsis, or shock.

Even if you have raw, unsalted bacon, it isn’t a good idea to use it as a dog treat—the fat content is still very high, the preservatives involved in curing bacon may harm your dog’s health, and raw meat may contain dangerous pathogens or parasites. There is no way to safely prepare bacon to feed to your dog, so it’s better to opt for dog-friendly fruits and vegetables—or, if you absolutely must give them a taste of your breakfast, look for low-fat bacon-flavored treats formulated for dogs.