Can I Give My Dog Chocolate?

Few flavors have grabbed America by the tongue the way that chocolate has. While the first thing that comes to mind is, of course, the bliss of a high-quality bar of dark chocolate, we also get our cocoa fix in a myriad of other ways. In the summer, we cool off with bowls of chocolate ice cream, or sundaes drenched in chocolate syrup. In the winter, we drink hot chocolate and indulge in fresh, warm baked goods loaded with chocolate chips (or, even better, chocolate chunks). We mold chocolate into all sorts of different shapes to add festivity to our lives. In many of our lives, chocolate has secured its own sacred square on our food pyramids.

Since chocolate is always around, we have countless opportunities to share it with our pets… but should we? Can dogs have chocolate?

As you may have heard, no, dogs cannot eat chocolate, and not just because it can cause obesity in excess. Giving your dog chocolate is not a bad idea merely because chocolate is junk food, but because it is literally toxic to canines. Even relatively small amounts of dark chocolate can result in life-threatening poisoning.

Risks of Feeding Your Dog Chocolate

Unfortunately, many dogs love the taste of chocolate, so it falls on you as their parent to make sure they don’t eat themselves sick. If your dog manages to eat more than a very small amount of chocolate, it would be wise to seek veterinary care as soon as possible. 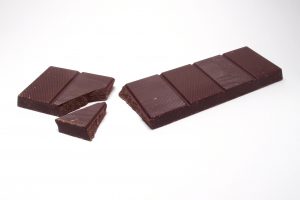 Even if your dog demonstrates a remarkably high level of tolerance for chocolate, it makes a terrible, unhealthy treat. Chocolate is usually very high in sugar, fat, and calories. Though dogs are omnivores, which means they can digest sugar far better than, say, cats, they still do not handle large amounts of processed sugar very well. Eating too much sugar can result in bloating, vomiting, upset stomach, or diarrhea. Eating too much fat in one go can cause many digestive symptoms, too, but it is also known to increase your dog’s risk of a painful, dangerous condition called pancreatitis.

In addition, feeding your dog sugar can cause or exacerbate oral health problems, including cavities and gingivitis. Poor dental health is often a cause of poor overall health—the bad bacteria in dental infections can easily spread to other organs through the bloodstream, resulting in illness and even organ failure.

All of these are reason enough to refrain from feeding chocolate to Fido, but of course, the most compelling argument against chocolate is this: it is literally poisonous to dogs. Chocolate contains a chemical called theobromine, which can make your pet severely ill in fairly small doses. The severity of your dog’s symptoms will vary based on their size, age, overall health, sex, and how much theobromine was consumed, but symptoms often get progressively worse as your dog’s body absorbs more of the toxic substance.

On the less severe end of the spectrum are symptoms like behavioral changes, anxiety, pacing, hyperactivity, drooling, vomiting, and diarrhea. If a substantial amount of theobromine is absorbed, your dog may exhibit more dangerous cardiac symptoms, like rapid heartbeat, heavy breathing, high blood pressure, or even irregular heartbeat and arrhythmias. At even higher doses, it begins to impact your dog’s nervous system, resulting in shaking, twitching, tremors, and in severe cases, seizures. Symptoms often take several hours to show up and can carry on for several days.

Left untreated, theobromine poisoning can be fatal, but you shouldn’t wait to see how bad the symptoms get—sudden cardiac arrest can occur with little warning (as the word ‘sudden’ may suggest).

The amount of chocolate your dog can stomach without severe illness will vary based on their breed, sex, overall health, and the type of chocolate consumed. In general, cocoa powder and baker’s chocolate are the most dangerous because they contain the highest levels of theobromine. Semisweet, dark, and milk chocolate come next, with white chocolate being recognized as the least toxic. This is something to keep in mind when you’re trying to figure out whether or not you should rush your dog to the vet’s office. If they eat a square of white chocolate, they will probably be okay. If they break into your baker’s chocolate, however, you may want to contact the vet.

If your dog hasn’t developed any symptoms yet, your vet may be able to head off poisoning altogether by inducing vomiting and administering activated charcoal. If toxicity has already set in, however, more extensive care may be required, including but not limited to IV fluids, medications to treat symptoms (such as seizures), and overnight monitoring.

Where chocolate is concerned, the best policy is to avoid giving it to your dog altogether. While it is true that certain types of chocolate pose very little risk of poisoning at very small amounts, it’s hard to gauge the exact amount of theobromine required to make your pooch seriously ill. If your dog is dying for a sweet treat, give them sliced fruit instead.