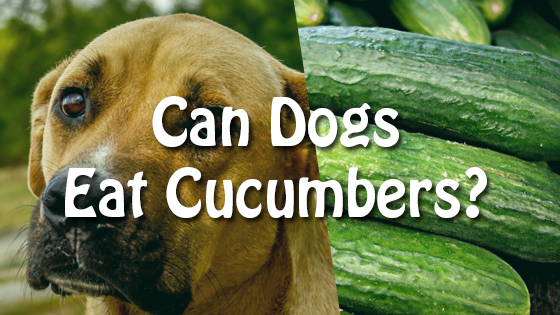 Can I Give My Dog Cucumbers?

They’re cool, juicy, versatile, durable, and delicious. Though not quite as popular as their flashier vegetable cousins like carrots and broccoli, cucumbers make frequent appearances in the kitchens of many veggie lovers. Some people like to put them in sandwiches with a dollop or hummus, some love them sliced into salads, and some like to use them to make a big pitcher of crisp, refreshing cucumber water. Many of us will even slice them up and eat them without any further preparation. Regardless of your preferred method, you probably consume cucumbers semi-regularly.

And when you, a pet owner, eat anything at all, your dog comes running. Fido can be awfully convincing when he rests his head on our knee and whines pathetically, but should we cave? Can dogs have cucumbers?

The answer is yes, dogs can eat cucumbers—in fact, they may be one of the best vegetables you can give your canine companions. While many other plant foods contain moderate amounts of toxins or difficult-to-digest substances, cucumbers are safe and easy to digest. Your dog would have to eat massive amounts of cucumbers before they were likely to suffer any significant health problems. Even then, their problem would be a result of too much fiber rather than any sort of toxicity. So: for the sake of their digestion, give this food in moderation, but know that there is no need to panic if your dog eats a little too much in one sitting. 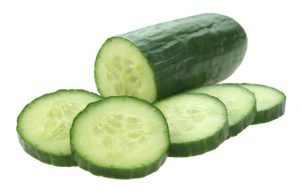 It is true that there are far more nutrient dense vegetables (after all, these cool veggies are mostly made of water), but these cucumbers do offer some health benefits for dogs. Firstly, they are a very hydrating food. Because they are made up mostly of water, feeding your dog cucumbers is a great way to combat dehydration after exercise on a hot summer day.

Like most vegetables, cucumbers also contain a fair amount of dietary fiber, which is good for dogs in moderation. The fiber-and-fluid combination present in cucumbers is an excellent choice for dogs who regularly struggle with constipation and other digestive problems. Fiber itself is indigestible, but it still has a remarkable effect on digestion.

When dietary fiber encounters water, it soaks it up and turns into a slippery, gelatinous substance. This substance helps introduce fluid into the colon, which can soften hard stool and ‘lubricate’ the way out of the intestines. With cucumbers, the water comes right along with the fiber, so you don’t have to worry about giving your dog extra fluid. Keeping your dog hydrated and feeding them moderate amounts of fiber is a great way to keep them regular. This improved digestion may also reduce their risk of colon cancer and other intestinal diseases, which can lengthen your dog’s lifespan.

Cucumbers are a great snack for dogs who are currently overweight or obese. Because they are made of mostly fiber and water, cucumbers are very low in calories—about 50 calories for the whole thing! Because fiber and water are both zero calories, your dog can fill up a lot of space in their stomach while taking in less energy than they would if they were to eat another food. This allows them to enjoy the feeling of physical fullness while reducing their overall caloric intake. In the end, cucumbers and other high fiber foods may be the key to putting your precious pup on a diet without having to see them go hungry.

Cucumbers also contain antioxidants, which can have a powerful protective effect on your pet’s overall health. Antioxidants destroy highly charged particles called free radicals, which are thought to be major contributing factors in many of our most dreaded diseases. Cancer, heart disease, arthritis, and even age-related problems like dementia are thought to be caused or exacerbated by free radicals.

Free radicals are highly reactive, which means that they damage the body cells they come into contact with. This damage sometimes destroys the cells outright, but sometimes, it results in genetic mutations that then lead to diseases like cancer. Antioxidants will decrease the number of free radicals in your dog’s body, which will protect their vulnerable body cells.

Though cucumbers are great in moderation, they should not make up a significant portion of your dog’s intake. These vegetables are not a good source of many of your dog’s daily dietary needs (protein, Vitamin A, fat, etc.), so forcing your dog to live on salad is not a good idea. Plus, eating too many cucumbers is likely to result in loose stools or diarrhea.

Overall, cucumbers are an excellent snack choice for dogs. They are low in calories, yet high in fiber, water, and antioxidants that will regulate digestion and protect overall health. Just remember to feed these and all vegetables to your pet in moderation—veggies alone can’t meet your dog’s dietary needs, and eating too much fiber will cause digestive problems.