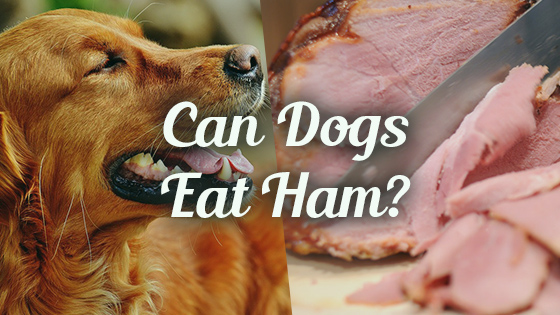 Can I Give My Dog Ham?

Once the leaves have fallen and frost starts to settle atop our roofs, our taste buds get excited as they anticipate the wide variety of flavors, both sweet and savory, that the holidays have to offer. In the meat department, this tends to mean one thing: ham. For many meat-eating families across the northern hemisphere, ham is a key component of many festive dishes for both Thanksgiving and the winter holidays.

Ham consumption is not, of course, limited to the holiday season—many people find ham to be their deli meat of choice, and in the past, it has been a key component of the quintessentially American ham and cheese sandwich. We get that we need to seriously limit our meat consumption to maintain optimum health, but what about our four-legged friends, who seem more inclined towards a carnivorous diet? Can dogs have ham?

The answer is no, dogs should not eat ham. While it is true that our dogs’ ancestors, wild wolves, live almost exclusively on the flesh of prey animals, the ham we find in delis and on grocery store shelves is a far cry from the fresh, unprocessed meat pulled directly off a wild deer. Though your bacon-loving uncle insists that eating honey ham is how our ancestors survived as cavemen, the reality is that the ham we eat is heavily processed and heavily flavored to make it palatable. Ham is not that great for our health, and it certainly is not good for our dogs’ health. If you need to give your dog something meaty at Thanksgiving dinner, you may be better off slipping them a bite of chicken breast. It’s almost certainly healthier than the holiday ham!

Are there ANY potential benefits to giving your dog ham every now and then? After all, you, as an American, have been raised to believe that protein is the king of macronutrients, and ham is full of protein. Shouldn’t that make it an excellent food for our four-legged friends, whose ancestors are meat-munching machines? 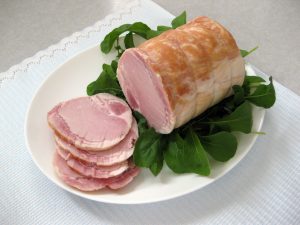 While it’s true that ham has a fair amount of protein—and a pretty solid balance of all the essential amino acids—this is pretty much its only redeeming characteristic, and ham’s protein content really is not enough to compensate for all of its negatives. Ham is not a significant source of any of the known cancer-fighting or immunity-boosting micronutrients dogs need to thrive. It is low in every vitamin and virtually every mineral except iron. Dogs who are eating nutritionally balanced kibble will be unlikely to benefit from the added iron found in ham.

Protein isn’t the only macronutrient found in ham. This holiday meat is also extremely high in fat, which can greatly increase your dog’s risk of developing a painful, inflamed pancreas, a condition known as pancreatitis. Symptoms of pancreatitis range in severity, but generally include vomiting, abdominal pain and bloating, poor appetite, behavioral changes, dehydration, and sometimes diarrhea. Pancreatitis can become chronic, which puts your dog at a higher risk of diseases like diabetes and pancreatic insufficiency, which can be fatal. The best way to prevent pancreatitis is to make sure your dog avoids high-fat foods and maintains a healthy weight.

Ham is also very high in added salt, which is why so many of us find it so addictive. Too much salt can hurt our health, of course, but our dogs are even more sensitive to it. Feeding your dog foods high in added sodium may increase their blood pressure, which can raise the risk of heart disease—or exacerbate the symptoms of existing cardiovascular disease. Too much salt can also contribute to dehydration, salt toxicity (otherwise known as hypernatremia), and bloat.

Both salt toxicity and bloat can be fatal within a day if they are left untreated. Symptoms of salt poisoning include diarrhea, vomiting, loss of energy, extreme thirst, excessive urination, clumsiness, swelling, tremors, and even seizures. Bloat, on the other hand, is defined by a painful, swollen abdomen, caused by large amounts of air getting trapped in the gut. This is often caused by dogs drinking too much water too quickly after eating salty foods that make them thirsty.

In addition to the salt, fat, and preservatives, ham is just too high in calories for too little nutrition! Ham is junk food for your dog. If you make a habit of feeding Fido ham, they can pack on the pounds pretty quickly. Obese dogs are much more likely to struggle with mobility and shortness of breath, and in the long term, may develop diseases like arthritis, heart disease, diabetes, and cancer. Keeping junk food like ham out of your dog’s diet will keep them healthy and extend their life.

Overall, it is not a good idea to feed your dog ham. Its high protein content is not worth all of the other junk that comes with it, including too much fat and salt, too many calories, and an increased risk of all sorts of unpleasant ailments. Opt for lower-salt, lower-fat options, like a small amount of baked turkey breast, or even better, sliced fruit.

3995 Views 1 Views
Tagged in:can dogs eat ham, can dogs have ham, can i give my dog ham