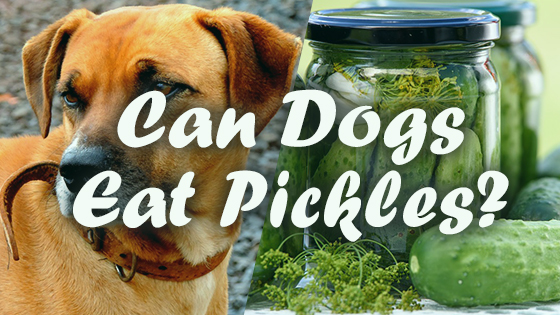 Can I Give My Dog Pickles?

In a culture where the idea of dietary perfection is shifting more and more towards the whole-food, plant-based way of eating, pickles are stuck in limbo. While no one is running around touting pickles as the cure to cancer or the key to preventing Alzheimer’s, they are not vilifying pickles the way that they vilify soda or boxed snack foods, either. Compared to many of the technically-edible monstrosities on supermarket shelves today, pickles seem wholesome: after all, they are just cucumbers that have been sitting in vinegar for a while. They’re technically vegetables, right?

So, can we share these technically-but-not-really vegetables with our dogs? Can dogs have pickles?

The answer: yes, but only in moderation, and only if they are in good health. Pickles, which were once innocent cucumbers, are not at all toxic to dogs, but they are not one of the best food options. You should feel free to give your dog an occasional pickle as a treat, but don’t make a habit of it—and make sure you go for sweet pickles. Spicy pickles may seem delicious to you, but they are often flavored with onions and garlic, which are extremely poisonous to canines.

Since we consider pickles to be Schrodinger’s vegetables, we have to wonder: are there any health benefits at all? Unfortunately, there are no real health benefits of pickles (for us or for our dogs!). While cucumbers are considered to be very healthy foods, pickles are almost completely nutritionally empty. They are low in protein, low in vitamins, and so full of salt that their water content is almost worthless. 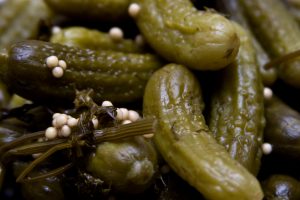 There is one ‘good’ thing about pickles: they contain a small amount of fiber. While your dog probably should not eat enough pickles for the fiber content to make a big difference, every little bit helps, and a boost to your dog’s fiber intake may be a good thing. Fiber, when consumed with plenty of water, is a great way to regulate digestion and ease constipation. Be warned, though, that too much fiber can throw your dog’s digestive system into chaos—many dogs who suddenly increase their fiber content wind up with diarrhea or constipation. When introducing a new food to your dog, always take it slow.

Though nutritionally empty, pickles may be a lower impact treat than other more ‘natural’ alternatives that may be higher in fat. Though high-fat foods like peanut butter are generally considered to be healthy for our dogs in small amount, all that fat adds up quickly. For dogs who have suffered pancreatitis, or dogs who are trying to lose weight, pickles may be a safe, low-fat, low-calorie alternative to these decadent treats. A standard pickle spear has less than five calories, which is unlikely to hurt your dog’s attempts at weight loss.

Though they are low in fat, pickles are loaded with that other great doggy dietary danger: salt. Pickles, one of the saltiest foods we eat on a regular basis, can have disastrous effects on your dog’s health when consumed in excess. Dogs can’t tolerate salt nearly as well as humans can, so your dog should never eat the same size serving of pickles as you do. Eating too much salt can result in a condition called hypernatremia, which means that your dog’s blood has unusually high amounts of sodium. Symptoms of hypernatremia include extreme thirst, vomiting, diarrhea, behavioral changes, confusion and disorientation, seizures, coma, and even death.

In the long term, eating a diet too high in salt can cause your dog to suffer from high blood pressure, which greatly increases their risk of suffering from heart attack or stroke.

If you choose to feed your dog pickles, avoid giving them heavily spiced pickles, which are often flavored with substances that are toxic to canines. In addition, resist the urge to toss them a whole pickle and let them gnaw on it—dogs are not renowned for their self-control, and they may choke in the process of trying to wolf down a whole pickle. To make sure they stay safe, cut the pickle into small slices and give them to your dog one at a time.

In sum, pickles are a safe treat option for dogs who have a soft spot for savory foods. They are low in fat, low in calories, and offer a small amount of fiber that may help regulate digestion. Though sweet pickles are not toxic to your dog, they should be given only in moderation, because they contain extremely high levels of salt. From a health perspective, it would be a better idea to opt for fresh produce like cucumbers, apples, or carrots, because, though they are technically vegetables, pickles are nutritionally empty.

That said, everyone loves a treat, and pickles are safe. Just make sure you slice the pickle into bite-sized pieces to prevent choking.