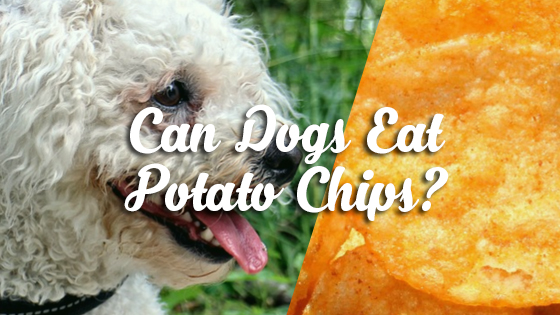 Can I Give My Dog Potato Chips?

Though many of our favorite treats are sweet in nature (think pie, chocolate, candy, and brownies), some of the most irresistible snacks are salty in nature. The king of salty snacks is the potato chip. Potato chips have ensnared mankind almost from the day of their invention—our parents and our grandparents love them just as much as we do, and people of all ages, races, and socioeconomic backgrounds stare longingly into the vending machines every time they leave a public restroom. Potato chips come in such a wide range of flavors that there is bound to be something for every palate.

While we get that our doctors would probably be happier if we swore off potato chips altogether, most of us have no problem with eating them on occasion. Many people keep potato chips on hand at all times—and then are forced to try to ignore their siren song emanating from behind the pantry door. Still, potato chips are technically edible, and we don’t think twice about snacking on them from time to time. But what happens when our dogs come begging for a taste of our salty snack? Is it okay to let them indulge? Can dogs have potato chips?

Technically, yes, dogs can eat potato chips, but it is inadvisable. Giving your dog any quantity of potato chips (even if they’re oven-baked!) is generally a bad idea, and some types of potato chips contain ingredients that are toxic to canines. While we certainly should not force our dogs to go their entire lives without indulging in delicious treats, potato chips are not one of the best treat options out there. Your furry friend will probably survive eating a handful of this crunchy junk food every so often, but feeding them potato chips regularly is extremely harmful. Look for another crunchy treat to give them while you eat chips so they don’t feel left out. 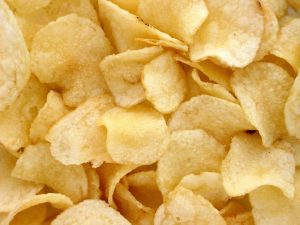 As you probably know, potato chips are not renowned for their nutritional value. They are empty calories in the human diet, and they are definitely empty calories for our pets! Though they have the word ‘potato’, potato chips come from potatoes that have been processed into a state that is almost unrecognizable. Potato chips have had all of the vegetable processed right out of them—which is why no one would suggest that a bag of chips is the same as eating a fresh baked potato.

There are no potential health benefits to giving your dog potato chips. They are a poor source of proteins, vitamins, minerals, and healthy fats. Chips made from sweet potatoes may claim to have Vitamin A, but your dog could not safely consume enough of them to benefit from it. If you’re looking to give your dog Vitamin A, there are plenty of canine-friendly snacks made out of vegetables like carrots and sweet potatoes.

Potato chips offer none of the nutrition of potatoes, and, to add insult to injury, they have a ton of added ingredients that make them harmful to canine (and human) health. This food is loaded with salt, refined carbohydrates, and unhealthy fats.

The salt content is one of the most dangerous potato chip traits. People can handle eating large quantities of salt on occasion (as long as we don’t have high blood pressure!), but dogs have a much lower tolerance for sodium. If your pooch eats too many salty potato chips, they can suffer from a serious condition known as salt poisoning, or hypernatremia. Look out for symptoms such as vomiting and diarrhea, poor appetite, extreme thirst (followed by excessive urination), walking drunk, tremors, seizures, and swelling of the limbs. If you suspect that your dog may have salt poisoning, take them to the vet immediately. Their chances of survival are much better if they can get supportive care such as intravenous fluids.

As you probably know, potato chips are little fat and calorie bombs. Eating too much fat may cause your dog to develop an illness called pancreatitis. Pancreatitis, which occurs when the pancreas develops excessive inflammation, causes symptoms like diarrhea, vomiting, high fever, fatigue, rapid heartbeat, labored breathing, and abdominal swelling. Dogs who have had pancreatitis in the past should avoid fatty foods altogether, as this condition can become chronic.

Potato chips can also cause weight gain, which can lead your dog to become overweight or obese. Canine obesity increases your dog’s chances of many illnesses, including diabetes, heart disease, arthritis, and cancer, and may cut as much as two and a half years off their life expectancy. If your pooch already has too much pudge, there is no excuse to offer them any junk food.

Even if Fido may be able to survive eating a handful of potato chips, they would be better off without it. This snack food is loaded with calories, salt, and fat, and deficient in every vitamin and mineral your dog needs to thrive. If you want to give your canine companion something to crunch on while you enjoy your potato chips, give them baby carrots or apple slices.