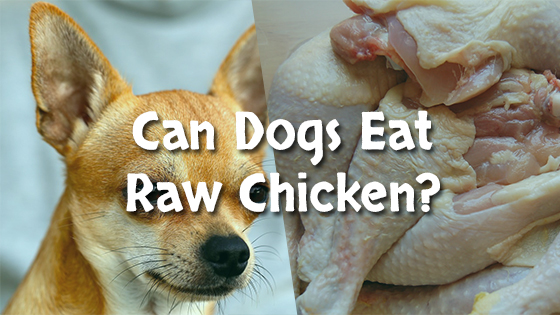 Can I Give My Dog Raw Chicken?

When it comes to feeding our pets people food, most foods fall firmly (and perhaps obviously) into the ‘yes’ or ‘no’ categories. Yes carrots, yes zucchini, yes sliced apples. No French fries, no bacon grease, no onion rings. We can often look at our own health as an indicator of whether or not something is healthy for our dogs—with the rare exceptions of the bad-for-dogs, good-for-humans foods like grapes and garlic.

When we enter the realm of raw meat, however, things get trickier. For hundreds (probably thousands) of years, people have tossed their canine companions scraps of raw meat while they prepared dinner. Now that we have moved from hunting caribou to pulling packaged chicken breasts out of a grocery bag, however, we have the time to wonder whether or not this is conducive to all-over health. This is especially true as more and more dog owners move towards omitting kibble completely in favor of preparing their dogs whole food meals.

We know that raw meat would make us horribly sick, but we also know that dogs are descended from wolves, who eat raw meat almost exclusively. Can dogs have raw chicken? Is it harmful, or is it actually healthier for them than processed kibble? Or is all the raw meat hype just a trend?

The raw food diet debate is complex, and there are a lot of contradicting opinions. Setting the big picture of the diet aside, if you are concerned about whether or not it is safe to toss your beloved basset hound a couple chunks of raw chicken while you are preparing dinner, it is generally safe, and even recommended by some veterinarians. Dogs are omnivores, and they can digest raw meat without any trouble. There is nothing in raw chicken that is toxic to their bodies.

However, due to current farming and processing practices, much of the raw chicken available at grocery stores is contaminated with Salmonella bacteria. This bacteria is the most common cause of food poisoning in humans, and it is almost always linked to poultry—which includes meat and raw eggs. Unfortunately, our furry friends are susceptible to this dangerous bacterium, too.

While Salmonella often does not cause such abrupt and dramatic symptoms in dogs as it does in humans, it often results in health problems such as gastroenteritis and, if the dog is pregnant, miscarriages. Symptoms of salmonellosis include shock, fatigue, fever, vomiting, diarrhea, loss of appetite, rapid heartbeat, swollen lymph nodes, and mucus in the stool. If you suspect your dog may have salmonellosis, bring them to a veterinarian immediately. This illness is contagious to humans, so letting them go without treatment is a danger to both their health and yours. 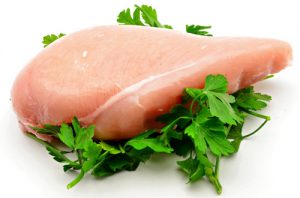 However, some veterinarians support diets high in raw meat, as they more closely mimic what dogs’ ancestors ate in the wild. Muscle meat and organs are high in the amino acids and naturally occurring fats suspected to support musculoskeletal and skin health. It is also thought that chicken feet, which are high in glucosamine, may promote joint health. Many pet owners who supplement their dogs’ diets with raw meat report improvements in energy levels and arthritis symptoms, as well as glossier, healthier-looking coats. Some veterinarians argue that this is simply due to the increased fat content, which can also be achieved with specially-formulated kibble.

While cooked chicken bones are completely unsafe for dogs, raw chicken bones are safe as long as your dog is supervised while eating them—though they are far safer than cooked bones, they are small enough to be a choking hazard for some dogs. As with the meat, keep serving sizes relatively small to avoid constipation, diarrhea, or an upset stomach. Every time you introduce a new food into your dog’s diet, there is some risk of upsetting their digestion.

Though some pet owners claim that the key to optimal health is feeding dogs nothing but raw meat, most veterinarians argue fervently against this sort of diet—recommended brands of kibble are formulated to meet all of your dog’s nutritional needs, and most at-home attempts to prepare nutritionally balanced meals for pets fall painfully short. If you were considering feeding your dog exclusively raw meat of any kind, talk to your veterinarian about supplementation.

Aside from the risk of Salmonella contamination, raw chicken is safe for dogs to eat. In order to make it as safe as possible, thoroughly wash the meat and all worktops (such as cutting boards and kitchen counters). Only feed your dog fresh meat—if it is past its expiration date, the risk of spoilage and contamination is far higher. In addition, if your dog has a cold or lowered immune function, refrain from giving them raw meat, because their body will be less able to fight off harmful bacterial infections.