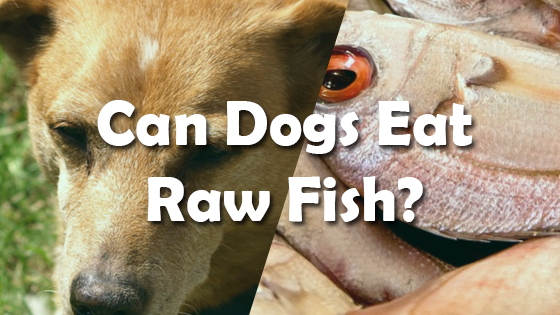 Can I Give My Dog Raw Fish?

In coastal areas, fish have been an important part of the human diet for thousands of years. If you have access to a big body of water, fish are one of the most abundant and efficient sources of calories available to you, so it only makes sense that our ancestors relied heavily on them. Though most of us no longer eat fish out of necessity—after all, our species has mastered the art of agriculture—it remains a staple food in many parts of the world. Though there are plenty of recipes that include cooked fish (chowder, soup, bakes, pastas, etc), there are a lot of people who eat raw fish on a regular basis.

Anyone with an interest in seafood eats raw fish with some regularity—it’s a key component of sushi, after all! Health magazines are full of articles about how healthy raw fish is for us, and the Internet is full of pet parents who claim that raw food diets are the best for our dogs, so it follows that raw fish would make a great food for our pets. But you heard somewhere that raw fish make dangerous pet food! Which is true? Can dogs have raw fish?

Technically, dogs can eat raw fish, but most experts strongly advise that pet parents avoid it. Most raw fish do not contain any ingredients that are poisonous to pets (salmon isn’t dangerous in the same way that chocolate and xylitol are dangerous), but they are very prone to contamination that can cause serious or life-threatening illness. If you’ve already given your dog a chunk of raw fish, they may be perfectly fine, so you don’t need to take them to the vet to head off toxicity. If your pet gets sick, however, see a vet as soon as possible. It is likely that the raw fish was contaminated.

Fish flesh is nontoxic, and it actually may be a great source of nutrition for adult dogs. This meat is very high in protein, which provides all the amino acids necessary for growing and maintaining a healthy body. Consuming adequate protein is necessary for normal growth and development, as well as athletic recovery and healing—most of the tissue in your dog’s body, including muscles, skin, nails, and hair, is made out of protein! Athletic or growing dogs may have increased protein needs, so fish has the potential to be a great protein supplement.

Many types of fish, including salmon, are also high in omega-3 fatty acids. Omega-3s have been quite popular in the health and fitness crowd in the last few years, and for good reason! Research on dogs is pretty limited, but there have been studies on humans and other animals that may also be applicable to our pets. These studies have found that consuming foods rich in omega-3 fatty acids may reduce chronic inflammation, which can alleviate the symptoms of allergies and autoimmune diseases such as arthritis. In reducing inflammation, a diet high in omega-3s may be able to relieve swelling and pain in the joints, which can improve mobility.

One study performed on dogs with cardiovascular diseases found that consuming omega-3s improved heart function and increased their chances of survival. Still other studies have shown that omega-3 consumption correlates with increased learning, improved memory, and slower loss of kidney function in dogs with kidney disease.

It’s true that some omega-3s are lost in the cooking process, but raw fish isn’t worth the marginal increase in nutrition. Uncooked fish is a breeding ground for dangerous pathogens (both parasites and bacteria) that can make your dog grievously ill. Some of these parasites, like flukes, are not themselves dangerous, but they carry bacteria that can kill dogs. Salmon poisoning disease is a great example of this. Symptoms of salmon poisoning, which generally manifest within a week of eating contaminated fish, include loss of appetite, vomiting, diarrhea, muscle weakness, fatigue, and fever.

In dogs who have salmon poisoning, survival depends entirely on how quickly they receive treatment. When dogs are diagnosed early, they usually respond well to treatment and make a full recovery. Without treatment, however, nine out of every ten dogs will die within two weeks of developing salmon poisoning.

Some sources recommend freezing raw meat in order to preserve nutrition while killing dangerous pathogens. This is a myth. Though putting our leftovers on ice seems to extend shelf life almost indefinitely, freezing food does not kill bacteria, and the only way to make fish safe for canine consumption is to cook it thoroughly. If you give your dog undercooked fish, you are putting their health at risk.

In conclusion, fish is a great supplementary food for dogs, but only if it has been fully cooked. Despite its slightly higher nutritional content, raw fish poses a serious danger to your pet’s health. The only way to kill disease-causing parasites and bacteria is to make sure that all fish you feed your dog is fresh and thoroughly cooked.