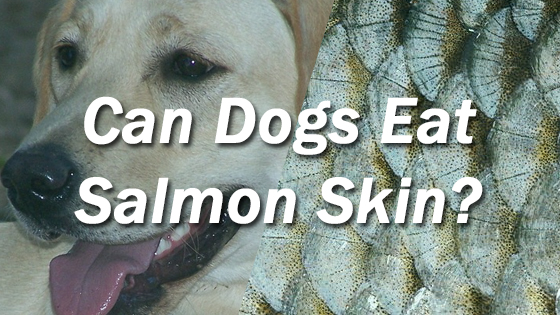 Can I Give My Dog Salmon Skin?

Fish has always been a staple food for humans in coastal areas around the world, but, if you read lifestyle magazines or walk through health food stores, you probably encounter salmon recipes more often than the average Joe. When we imagine salmon, we tend to conjure up the image of a beautifully put together plate of food: we imagine a symmetrically-cut piece of pink meat sprinkled with fresh herbs and seasonings. If you regularly buy whole salmon and prepare them for yourself, however, you are a little more in touch with the reality of this meat: salmon comes with a head, eyeballs, and covered in silvery skin.

The idea of eating a fish’s head is gross to many of us, but the skin strikes us as technically-edible food scraps that we throw away because we are picky, picky humans who only want the best parts of every food. If you’re looking to reduce food waste (and which of us isn’t?), salmon skin seems like a great thing to drop in your dog’s food bowl after dinner. After all, salmon is often touted as a super food, and the skin can’t be too different from the meat, right? Should we give our dog these fishy scraps? Can dogs have salmon skin?

The short answer is yes, dogs can consume washed, fully cooked salmon skins in moderation. Though our guts tell us otherwise, most fish skins are completely edible both for us and for our pets—if the animals muscles are safe to eat, their skins usually are, too. Actually, fish skins are technically the most nutrient-dense part of their bodies: salmon skin contains higher amounts of healthy fats and micronutrients than the pretty pink muscle meat that we like to prepare for dinner. 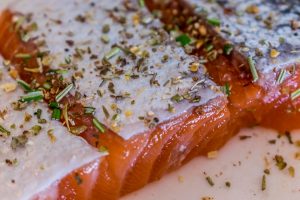 Fats, vitamins, and minerals are not the only things present in higher concentrations, however. Environmental toxins also tend to build up in the skin more quickly than they do in the flesh. In modern times, the fish we eat often contains pollutants that can show up in their skins in large amounts. It is important to note, on the other hand, that there is no way to avoid these pollutants without avoiding fish altogether, because the fish’s entire body will absorb them. Most of the time, fully cooked fish skin will be about as clean as fully cooked fish meat. Do some research on pollutants in fish, and treat salmon skins as treats or supplements rather than dietary staples.

Despite the long-term health risks associated with fish, salmon skins do contain quite a lot of nutrition. This fish is loaded in omega-3 fatty acids, which have earned the spotlight in recent years for their effects on heart and brain health in humans and other animals. There have not been too many studies pertaining to the long-term health effects of omega-3 fatty acids in the canine diet, but the research done on other animals is promising.

Now that the low-fat craze of the 1990s has finally died, most of us understand that not all fats are created equally. Whereas trans fats should send us scurrying, omega-3 fatty acids are one of the healthy fats—they are believed to protect against several types of cancer in many animals. In lab studies, omega-3s were able to slow the growth rate of tumors and cancer cells. Giving your dog salmon skin definitely will not prevent or cure any cancer, but it may be able to lower their chances of developing the disease—or maybe even slow its progression. If your dog has cancer, however, ask your vet before giving them any fish.

As previously mentioned, the biggest problem with salmon skin (and fish in general) is the bioaccumulation of pollutants like PCBs and mercury. These toxic contaminants, which are absorbed from the environment, show up in every part of a fish’s body, but they are often more concentrated in the skin. Consuming contaminated fish once is not likely to cause any noticeable side effects, but it can lead to mercury poisoning over time.

There is another type of contamination that can be even more dangerous: pathogens! If you give your dog salmon skins, make sure they are thoroughly cooked first. Raw fish meat is a breeding ground for bacteria and parasites, including salmonella and E. Coli, that can cause serious toxicity. Symptoms include fever, loss of appetite, fatigue, muscle weakness, vomiting, diarrhea, behavioral changes, depression, weight loss, swelling, and nasal discharge. If your dog gets sick after eating fish, seek veterinary care immediately.

The only way to kill the pathogens present in fish flesh is to cook it. Though the Internet may tell you otherwise, freezing meat DOES NOT kill bacteria—you can’t give your pet raw fish straight out of the freezer!

If you are looking to reduce food waste, cooked salmon skin is generally considered safe to give to healthy adult dogs in small quantities; it is rich in vitamins, minerals, and healthy fats that may fight inflammation and cancer. However, fish meat also comes with a double-sided risk of contamination: both by pathogens and by heavy metals like mercury. To keep your dog as safe as possible, either avoid giving them fish at all, or make sure that they eat it fully cooked and in small quantities.