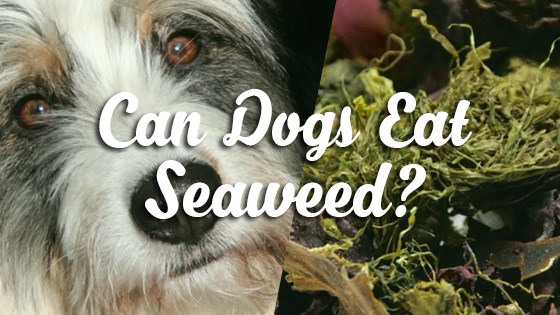 Can Dogs Have Seaweed?

When we think of seafood, we often think of animal foods first—fish like tuna, shrimp, salmon, lobsters, and even clams and oysters. The quintessential seafood dish, however, is sushi, and one of the key ingredients of sushi isn’t an animal at all. People who include seafood in their diet often eat ocean vegetables without thinking about it, with seaweed being one of the most widely consumed sea-dwelling leafy greens. Seaweed is often touted as a superfood comparable to land vegetables like kale and vegetables, but, because it comes out of the ocean, it has an added air of mystery and adventure.

That’s great for humans, but what about humans’ animal companions? If you share your home with a dog, you are all too aware of the fact that most of the foods you eat will eventually end up in your doggy’s dinner dish. As a general rule, if we start eating a new food, so, too, do our pets– unless we make a concerted effort to keep a certain food away from our dogs (like chocolate!), they will get a taste of it sooner or later. So, should we be worried about the seaweed lurking in our kitchen? Or is seaweed, in fact, a canine superfood? Can you give your dog seaweed?

The answer is yes, dogs can eat seaweed in moderation—in fact, many dogs may benefit from including ocean vegetables in their diet. Though many on the Internet are quick to point out our dogs’ wolf ancestry, domesticated dogs are actually omnivores, and they can gain a lot from eating a wide range of plant foods as part of a balanced diet. Most dogs can eat seaweed several times a week without suffering any negative health effects, so feel free to use this food as a healthy, whole food dietary supplement for healthy adult dogs. As with any food, make sure that the seaweed you purchase is high quality and free of potentially dangerous additives. 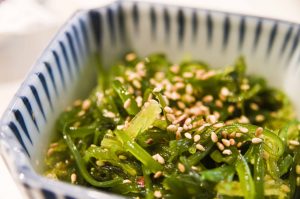 There’s a reason why so many people consider seaweed to be a powerful superfood: it’s loaded with important vitamins, minerals, and antioxidants. Different types of sea vegetables have varying ratios of different nutrients, but most seaweed is high in magnesium, iodine, and omega-3 fatty acids.

Magnesium is a key component of your dog’s body cells—it makes up a large part of bones, as well as soft tissues such as skeletal muscles and the liver. Magnesium deficiency can cause a wide range of unpleasant and potentially dangerous symptoms, including malfunctions in your pooch’s skeletal muscles that can result in poor muscle coordination, stiffness, and severe pain. Other symptoms of magnesium deficiency include trembling, depression, rapid heartbeat, behavioral changes, and overactive reflexes. Seaweed can provide a boost of this key mineral, preserving muscle health and function.

That said, magnesium deficiency is relatively rare in healthy dogs who consume adequate diets, so, if you believe your dog may have developed a deficiency, they need to see a veterinarian before receiving supplementation (even in the form of whole foods like seaweed). Magnesium deficiency is often an indication of an underlying condition like diabetes or a reaction to prescription drugs that have resulted in kidney damage.

Many types of seaweed are also loaded with a nutrient that is traditionally attributed to fish: Vitamin B12. Vitamin B12, an essential vitamin for dogs and for humans, plays a key role in cognitive and nervous system health—without this important nutrient, nerve cells are unable to function properly. Low levels of B12 in the body can contribute to gastrointestinal problems, a suppressed immune system, poor appetite, depression, and extreme fatigue. Consuming inadequate levels of Vitamin B12 can even contribute to anemia.

As with magnesium, seaweed alone is not a suitable treatment for Vitamin B12 deficiency, but it may be helpful when used in conjunction with a B12 supplement prescribed by your veterinarian.

Certain types of seaweed—especially kelp—are also rich in iodine, which stimulates the thyroid gland and helps regulate metabolism. As part of a healthy diet and exercise routine, iodine-rich foods like seaweed may help with energy levels and support weight loss.

The omega-3s found in seaweed can help protect skin, coat, and joint health, too. Though research is limited, some pet parents swear by supplementary seafood to treat dry or itchy coats in canines—they report that their pets’ fur coats became soft and shiny after they began eating seaweed regularly. Kelp is a particularly popular option for maintaining skin and coat health.

Like most dietary supplements, seaweed comes with some degree of risk. Seaweed may be high in sodium, which can cause sodium ion poisoning when it is consumed in excess.

Like other seafood, it may also contain environmental pollutants like heavy metals, which can cause health problems if they are ingested regularly in the long term. Mercury poisoning as a result of eating seaweed is extremely rare, but it is something to be aware of. Symptoms of mercury poisoning include anxiety, vision problems (even blindness), kidney damage, neurological problems, numbness, tremors, diarrhea, and, in severe cases, convulsions, coma, or death.

The risk of mercury poisoning is one of the biggest reasons to use seaweed as a supplement or a treat rather than a dietary staple. Instead of giving your pooch a seaweed salad, try mixing small quantities of seaweed in with their regular dog food. This will flavor their food, give them a healthy boost of vitamins and minerals, and lower their risk of mercury poisoning.

Finally, never feed your dog wild, desiccated seaweed that you found lying on the beach! The kelp sitting on the beach at low tide may be high in environmental toxins or other pathogens. Seaweed that has been sitting in the sand for an extended period of time often begins to rot and is fed on by disease-carrying insects, so it is not suitable for canine consumption.

In conclusion, seaweed is a safe and beneficial dietary supplement when it is given to dogs in small quantities, but pet parents should be mindful when giving this food to their pets. Use only high-quality seaweed purchased at the store. If it isn’t safe for you to eat, it isn’t safe for your dog to eat.