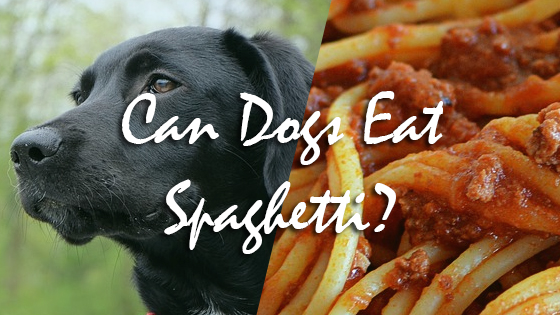 Can Dogs Have Spaghetti?

Everyone has their personal favorite pasta dish, but one of the most popular noodle-based dishes is spaghetti—it’s one of the few meals that most of us consume at least once a month. Though each person swears that their personal spaghetti recipe is the best one in the world, and they all have their own secret ingredients, most of us are perfectly happy to eat at our friends’ houses on spaghetti night. It’s an agreeable, affordable, easy-to-prepare dish that can be made to suit everybody’s dietary needs and preferences, whether your dinner guests are vegan, gluten-free, low-carb, or high-protein eaters. Spaghetti  can be as healthy or unhealthy as the chef wants it to be; it’s totally possible to enjoy a spaghetti packed with whole grains, fresh tomatoes, and broccoli one night, and chow down on a bowl of white spaghetti noodles smothered in cheese the next.

Because we eat spaghetti so frequently, there is a pretty good chance that, sooner or later, we will be faced with a decision: should we dump our leftovers into Fido’s food bowl, or should we just put them in the fridge to eat later? Is leftover spaghetti a safe treat for our dogs to enjoy on occasion, or are we putting their health at risk when we share this savory food? Can you give your dog spaghetti?

The answer is yes and no. Yes, dogs can eat spaghetti noodles in moderation—there is nothing poisonous in the average package of noodles, and dogs can usually digest them without any difficulty, so the only thing to be aware of is their calorie content. However, dogs should not consume most types of spaghetti sauce, because they are almost always made with ingredients that can cause toxicity in significant amounts. So, if your spaghetti sauce is just diced tomatoes, it should not hurt them, but it would be wise to avoid exposing your pooch to any spaghetti sauces made using onions, garlic, or added salt. If your dog has already eaten a bit of leftover spaghetti, they will probably be okay, but it’s a good idea to keep an eye on them for the next 48 hours or so to make sure they don’t develop any health problems. 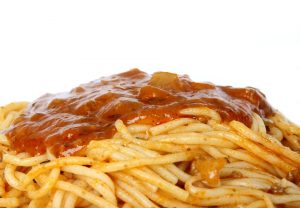 Are there any health benefits to sharing spaghetti with your dogs? Most of the time, the answer to this question is ‘not really,’ but there may be a few situations where spaghetti can offer some small benefits.

Though white spaghetti noodles made from refined flour are nutritionally empty and pretty likely to cause insulin spikes, whole grain spaghetti noodles contain moderate amounts of protein, fiber, and complex carbohydrates—which is why pasta is a favorite food of runners and other athletes who need to pack their bodies full of easy energy. Though you definitely should not make a habit of using pasta for your dog’s main meals, dogs who are underweight or extremely physically active may benefit from eating small amounts of whole grain pasta in order to get some extra calories on board in a way that is tasty, easy to digest, and less likely to cause insulin spikes than many junk foods.

The moderate amounts of fiber in whole grain pasta can aid in digestion, too. Fiber improves digestion by soaking up water and ferrying it into the colon, which can make stool softer and easier to pass. The dietary fiber in whole grains also adds bulk to stool and stimulates bowel movements, which can help keep your dog regular.

There may be some health benefits to giving your dog a dollop of plain, unseasoned tomato sauce, too. Tomatoes themselves are very healthy for dogs in moderation. These red veggies are full of a powerful chemical known as lycopene, which is believed to lower your pup’s risk of developing autoimmune diseases, several types of cancer, and other chronic illnesses. The lycopene found in pure tomato sauce can help neutralize free radicals inside your dog’s body, protecting their cells from damage and disease. Some studies have found that lycopene is particularly effective at fighting against lung and esophageal cancers.

Tomatoes are also good for eye and bone health, with a handful of studies suggesting that lycopene consumption may protect against bone loss and macular degeneration as animals age. They also contain nutrients like Vitamin A, Vitamin C, and potassium, which are all necessary for optimal canine health. Most of your dog’s nutrient needs should be met by their dog food, but fresh, unseasoned tomato sauce may be a good way to boost their nutrient intake.

Still, spaghetti is not one of the best foods you can give to most dogs—compared to other foods, it’s rather low in nutrition and high in calories. Dogs who eat spaghetti noodles regular may be more likely to pack on the pounds and may end up overweight or obese, which will greatly increase their chances of developing chronic diseases. Obese dogs are more likely to suffer from arthritis, diabetes, cancer, and heart disease; evidence suggests that obesity can cut your dog’s life short by up to two and a half years!

White pasta is especially bad for dogs who are diabetic or overweight. Because it has had all the fiber stripped out, white pasta basically turns into sugar inside the body—it causes insulin spikes that result in hunger and lethargy, making your already-pudgy dog more likely to overeat. This is why spaghetti noodles are not recommended for dogs who are overweight or obese.

It bears repeating that most types of spaghetti sauce are not safe for canine consumption. Pasta sauces containing garlic or onions, which are poisonous to dogs, can result in life-threatening toxicity. Any pasta sauce made with salt or large amounts of seasonings should be avoided, too—too much salt can cause dehydration and sodium ion poisoning, which can be fatal.

In general, giving your dog small amounts of whole wheat spaghetti with plain tomato sauce is pretty safe, but you should probably keep your spicy spaghetti dinner out of their bowl. Most spaghetti sauces contain ingredients that are toxic to dogs, and white spaghetti noodles can quickly lead to weight gain and insulin resistance.