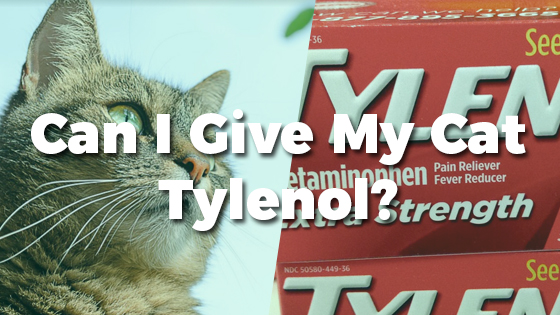 One of the best things about being human is the relatively low amount of physical pain that most of us have to endure throughout the course of our lives. Though we all have illness or injury to deal with from time to time, we are able to alleviate our symptoms by taking any one of countless over-the-counter drugs tailored specifically for our type of pain. There are drugs meant mostly for inflammatory pains like arthritis or a sprained ankle, there are drugs designed specifically for headaches, and there are drugs to neutralize the burning pains in our fragile stomachs. One of the most popular painkillers, however, is Tylenol, which has become the default pain medication for many people.

But what are we supposed to do when our pets are struggling with aches and pains? When my cat is in pain, I’m tempted to offer them relief in the form of my most trusted over-the-counter pain medication, but can my cat have Tylenol?

No, you should not give your cat Tylenol under any circumstances. This popular medication is something that many of us take to ease our pain without a second thought, but its active ingredient is a substance that is extremely poisonous to both cats and dogs. Unfortunately, hundreds of beloved pets die every single year after ingesting Tylenol—both by accident and when caring pet parents use it to try to ease their pain.

This is especially problematic for cat owners, because felines are even more susceptible to this drug than their canine counterparts. Just one regular strength Tylenol is enough to kill many cats. If you think your cat may have eaten a single Tylenol tablet, get them veterinary care as soon as possible. When it comes to Tylenol toxicity, time is of the essence.

Tylenol is somewhat unique among over-the-counter painkillers. Many other popular pain medications are non-steroidal anti-inflammatory drugs (NSAIDs), such as ibuprofen, naproxen, and yes, even aspirin. Though the NSAIDs vary slightly in their efficacy and how long their effects will last, they all work in much the same way: they temporarily disable the enzymes responsible for the creation of inflammatory-causing substances that trigger the inflammatory response in the body. The inflammatory response, after all, is the cause of the symptoms these drugs treat: fever, swelling, and discomfort.

Tylenol is not a NSAID; its active ingredient is a substance called acetaminophen. Science still hasn’t totally figured out why acetaminophen works at relieving our minor aches and pains— it does not have the same effect on inflammation that NSAIDs like ibuprofen do. This means that, even if it didn’t kill your cat, it likely would not do much to help with their cat’s injury or arthritis symptoms, which are often caused by inflammation. If your cat is dealing with joint pain and limited mobility as a result of arthritis, you and your vet will be much better off finding a way to relieve some of the inflammation causing the problem.

Acetaminophen has been known to cause liver or kidney problems in hundred-and-fifty-pound humans, so it should not come as a surprise that our tiny cats would be susceptible to small amounts of the drug. This drug will destroy cells in the liver and kidneys, which can potentially cause organ failure and death. Acetaminophen also damages hemoglobin, which means that their blood can no longer effectively carry oxygen throughout the body.

If your cat eats a Tylenol tablet, they may develop symptoms such as breathing problems, sudden changes in body temperature, brown or gray gum tissue, swelling in the face, legs, or neck, vomiting, and jaundice (yellowing skin or eyes). Jaundice is one of the telltale symptoms of liver damage, which is irreversible.

If your cat has ingested Tylenol, it is crucial that you get them to the vet as soon as possible—do not wait to see if poisoning symptoms begin to show up. Damage done to the liver and the kidneys cannot be undone, and is often fatal. Even if your cat survives the episode, they will have to receive treatment for their organ damage for the rest of their lives.

If you inform the veterinarian that your cat has acetaminophen in their system, it will be treated as a medical emergency. Following blood and urine tests, your cat may need supportive care such as oxygen and intravenous fluids or drugs. If you wait too long, these may prove useless. Some cats whose owners adopt the “wait and see” approach die in the middle of treatment.

In conclusion, it is never safe to give your cat Tylenol. All ‘versions’ of this drug contain acetaminophen, which is extremely poisonous to felines. Even if your cat eats one Tylenol tablet by accident, you should seek immediate veterinary care. This drug, which kills many companion animals each year, can result in toxicity even at fairly low doses.

Leave a Reply to Kathreen Miller