Can I Give My Dog Aleve? 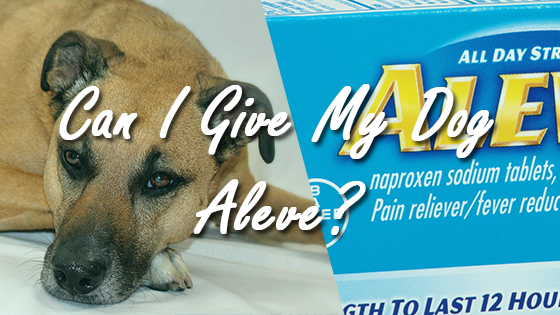 Can I Give My Dog Aleve?

It’s nice to be a human. When we have aches and pains associated with fatigue, arthritis, injury, or even a run-of-the-mill head cold, we simply waltz into our bathroom, open up the medicine cabinet, and read the backs of bottles until we find the drug that aligns with our symptoms. We can rest easy knowing that all of the FDA approved drugs in our homes have been thoroughly tested and deemed safe for humans. Other animals don’t have this luxury—but our pets DO have us, their caretakers and makeshift pharmacists.

Aleve is one of the most popular NSAIDs (non-steroidal anti-inflammatory drugs) today; you probably feel safe using it for injuries, menstrual pain, headaches, or joint pain. But when your dog is suffering, you’re not sure what to do. While drug stores are full of countless drug options for us humans, most of us have a hard time finding anything that has been approved for use in dogs. The FDA, unfortunately, does not have a canine department, so you are left trying to extrapolate based on what is approved for human use. You find yourself wondering, can I my dog have Aleve?

The answer is no, dogs can’t take Aleve—ever.  Even in small doses, this pain reliever is highly poisonous to canines. If your dog somehow consumes any Aleve, even if they eat it one time by accident, you should take them to the vet as soon as possible. Your vet will be able to induce vomiting to help protect your dog from the potentially life-threatening effects of consuming this drug. 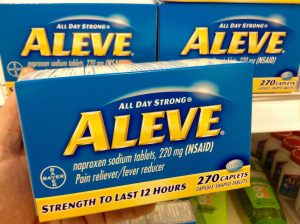 Aleve contains naproxen, which is a non-steroidal anti-inflammatory drug that bears some similarities to ibuprofen. This drug relieves pain in humans by decreasing production of a chemical known as prostaglandin, which is a catalyst for the inflammatory response that often leads to pain, swelling, and fever. Naproxen, which has longer-lasting effects than ibuprofen, is generally recommended for treating pain associated with more chronic conditions like arthritis. This is why Aleve is in so many people’s medicine cabinets. It is also why our dogs have so many chances to eat it out of our purses.

Though Aleve is associated with a slightly higher risk of cardiovascular problems than ibuprofen, it is generally considered safe for human use. Unfortunately, the same can’t be said for dogs. If you give your dog Aleve to treat their aches, pains, or fever, you may find that they actually seem to improve in the short term—the inflammatory response is pretty similar in most animals, so naproxen will likely reduce the inflammation in your dog’s body, lower their fever, and alleviate whatever pain they were feeling.

The short-term relief is not worth the side effects. Giving your dog Aleve is likely to result in painful complications like vomiting, diarrhea, gastrointestinal bleeding, and even stomach ulcers. This drug also has a high risk of damaging your dog’s kidneys and liver. There is no dose of Aleve that is considered safe for your pet, so it should be avoided altogether.

This drug is absorbed very quickly in the stomach and the intestines, but the onset of symptoms of naproxen toxicity varies based on the amount of poison ingested. If your dog gets a high dose of Aleve, they may start to show symptoms of poisoning within an hour. With lower doses, it may take up to several days for your dog’s body to respond negatively. Often the earliest, most mild symptoms are stomach problems. Your dog may suffer from indigestion, restlessness, and vomiting.

If the drug does enough damage to the lining of your dog’s stomach, they may begin to vomit blood. Severe damage can also result in ulcers, and in the worst cases, stomach perforation. Stomach perforation is a life-threatening condition that occurs when the wall of your dog’s stomach is punctured by illness or injury, allowing digestive fluids to leak into the abdominal cavity. Severe bleeding often requires blood transfusions to keep the dog alive.

Aleve can also reduce blood flow to the kidneys, which can result in kidney failure. High doses may also damage other vital organs, including the liver and the brain. Other symptoms of naproxen toxicity align more typically with standard poisoning symptoms: vomiting and diarrhea (which may be bloody), seizures, loss of appetite, abdominal swelling and pain, dehydration, and pale mucous membranes caused by blood loss.

In conclusion, Aleve is not at all safe for dogs. Though this NSAID is popular for humans, it is extremely poisonous to our canine companions in any dose. Pet owners should not use Aleve to treat their dog’s injuries or illness. If your dog gets ahold of Aleve, either accidentally or intentionally, it would be wise to get them veterinary care as soon as possible. This drug can cause extreme discomfort, permanent kidney or liver damage, and even death.

2025 Views 1 Views
Tagged in:can dogs have Aleve, can dogs take Aleve, can i give my dog Aleve

Can I Give My Dog Benadryl?   Can Cats Eat Spinach?