Can I Give My Dog Tylenol? 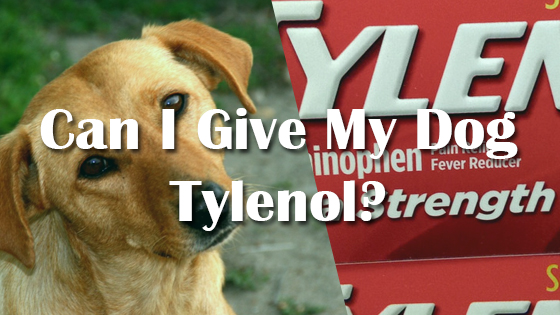 Can I Give My Dog Tylenol?

When we take a moment to list off the marvels of modern science, most of us talk about computers, spaceships, watches that somehow manage to track our sleep, and advanced CGI technology. We often take for granted the smaller miracles that make our day-to-day lives as humans far less painful than they are for other animals. One such scientific creation is Tylenol, the pain medication many of us use to combat stress headaches and other aches and pains. This drug is one of the most popular over-the-counter medications today, so almost everyone has it in the house. It’s a standard feature of most medicine cabinets.

That means that it’s one of the first drugs we look at when we consider treating our dogs’ pain at home. We hate to see our canine companions in pain, so many of us scurry into our private pharmacies as soon as Fido starts to limp. Is our favorite headache drug, Tylenol, a good choice? Can my dog take Tylenol?

The answer is no, you should not give your dog Tylenol. This drug may seem like a great idea (after all, it eliminates your headaches faster than anything else), but it contains ingredients that are highly toxic to dogs. Every year, several hundred companion animals die after ingesting Tylenol, whether it was given to them by their owners or ingested by accident. Do not give this drug to your dog to treat their symptoms. If your dog eats a couple Tylenol out of your bag, take them to the vet or contact a poison control center. Tylenol poisoning should be treated as a medical emergency—the sooner your dog gets veterinary care, the better their chances of survival. 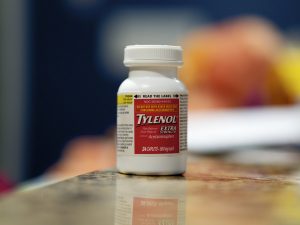 Tylenol does not work in the same way that non-steroidal anti-inflammatory drugs (NSAIDs) like aspirin, ibuprofen, and naproxen do. NSAIDs put a halt to pain and fever by switching off the enzyme that creates the chemicals responsible for causing inflammation, which leads to swelling, fever, and pain. Tylenol, on the other hand, uses the active ingredient acetaminophen, which is not an NSAID.

Scientists still aren’t entirely sure how or why acetaminophen works to relieve pain, but it doesn’t appear to inhibit inflammation the way that NSAIDs do. This is one reason why you probably wouldn’t want to give this drug to injured or arthritic dogs even if it could be administered safely—it would not actually reduce their inflammation, so it will not help with arthritis-induced joint pains. Acetaminophen is not as well understood as other types of pain relievers, and it is poorly researched in canines.

It does not take a high dose of acetaminophen to be fatal. Tylenol claims the lives of many pets whose well-meaning owners slip them a tablet or two with the intention of easing their aches and pains.

Symptoms of Tylenol poisoning can vary based on the amount consumed, but they generally include ragged or labored breathing, excessive vomiting, fever or low body temperature, discolored (gray or brown) gums, and swelling in the face, throat, and legs. As a result of liver damage, dogs may also develop a yellowish tint to their skin and the whites of their eyes. Liver damage is irreversible and often fatal, especially if it is not caught early. If your dog displays these symptoms and there is any chance that they have consumed Tylenol, take them to the vet immediately.

Make sure you let your vet know that your dog has consumed a drug containing acetaminophen—this is a medical emergency. Your vet will likely perform blood and urine tests to figure out the degree of toxicity before moving forward with treatment. Your dog may receive IV fluids, supplemental oxygen, and a variety of drugs to help reduce toxicity or maintain liver function. If your dog does not receive care soon enough, they may die in spite of your vet’s best efforts. Seeking help in a timely fashion is crucial.

There are drugs that are safer than Tylenol (some pet owners swear by using baby aspirin on their pets), but the best thing you can do for your ailing pet is seek veterinary care. Because we are not trained professionals, all we can do is speculate as to the cause of our dog’s symptoms. And, because our dogs can’t speak English, their symptoms are an important part of communicating with us—covering up their pain may delay treatment in an emergency. If your dog seems to be in pain, take them in for professional care. Your vet may be able to prescribe painkillers that are safe for your pup.

Most of us love being able to take Tylenol for our headaches, but this dog should never be given to our dogs. Acetaminophen is extremely toxic to pets. If your dog ingests this drug by accident, or if you have given them a tablet or two for their joint pain, seek veterinary help.