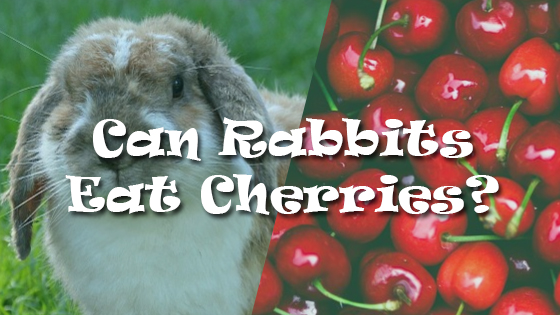 Can Rabbits Have Cherries?

While the healthiest among us have always considered fruit to be the ideal dessert, the reality is that most of us would scoff if someone offered us an apple or an orange for our after-dinner sweet treat. There is, however, one fruit that almost everyone associates with dessert: the beautiful bright red cherry. Cherries are often a bit pricy and their availability is limited to the hot summer months. These facts only serve to make cherries feel even more like a delightful delicacy. If cherries were readily available, more people would probably jump on the ‘fruit for dessert’ train!

Those of us with rampant sweet teeth often pity our pets, who generally are not designed to eat any of our favorite desserts. Fruit, however, is healthy! So, how about treating our rabbits to a couple cherries instead of a cookie?

Can you give your rabbit cherries?

The answer: yes, rabbits can eat small quantities of cherries as a rare treat. These are one of the fruits that are often recommended as bunny treats—they are nontoxic, rich in antioxidants, and generally well tolerated in appropriate amounts. Note, however, that cherries should only be used as your rabbit’s dessert. Though your doctor would probably be thrilled to hear that you were eating a cup of cherries every day, they are not recommended as a dietary staple for our furry friends. 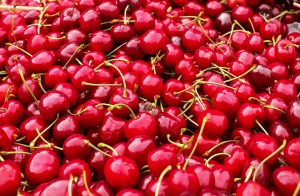 There are several potential benefits to using cherries as your rabbit treat of choice. Unlike some mass produced rabbit treats, which are little better than cookies and crackers, these brightly colored stone fruits are full of vitamins and antioxidants that may benefit rabbit health.

Though more research is needed to fully understand the relationship between antioxidants and health, it appears that these powerful substances are beneficial to just about everyone—you, your kid, your cat, your dog, and, yes, your rabbit. While antioxidants are not recognized as a daily dietary need, they can have powerful protective effects on overall health.

This is because antioxidants found in cherries, like cyanidin and anthocyanins, neutralize highly reactive particles called free radicals. Free radicals are present inside your rabbit’s body at all times—they are natural byproducts of metabolic processes such as digestion and breathing—but they appear to be anything but helpful to overall health. Because they are highly charged, free radicals alter the structure of the atoms that make up your bun’s body cells. Sometimes, this is totally harmless. Other times, it results in genetic mutations that later lead to disease.

Free radical activity has been linked to many of the ailments that commonly affect people and other animals. Some of these conditions include diabetes, heart disease, respiratory illnesses, neurodegenerative diseases (including Alzheimer’s in humans), and even aging. Some research suggests that consuming foods containing antioxidants may boost quality of life as well as lifespan in humans and other animals.

Cherries are also renowned for their anti-inflammatory properties. In fact, many athletes drink cherry juice in an effort to speed recovery after hard workouts. For rabbits, the effect of anti-inflammatory foods is more likely to prevent disease than it is to support their quest for an Olympic medal—anti-inflammatory foods may reduce the risk of inflammatory illnesses, but they are also thought to alleviate the symptoms of existing illnesses. Arthritis is probably the illness that will demonstrate the most obvious improvements. Research has shown that eating anti-inflammatory foods can reduce inflammation in the joints, which will both lower pain levels and increase joint mobility. This can help your aging bunny move around better and with less pain.

Though cherries are human superfoods, rabbits should not eat them regularly or in large quantities. Your rabbit does not have the same need for fruit that you do—they will not wind up with scurvy! Cherries and other fruits do contain many substances that can be beneficial to bunnies, but their digestive systems are not set up for processing large amounts of any fruit. Cherries and other fruits are too high in sugar for rabbits to digest in large amounts. If your bun eats too much fruit (and they will if given the opportunity!), they will develop digestive problems. Cease feeding your furry friend any fruit if their stool changes in appearance or frequency.

Continuing to feed your bunny fruit when they have digestive troubles can lead to serious health problems down the road. While cherries make great treats, most of the rabbit diet should consist of hay, water, and grasses. While rabbits can eat vegetables every day, they should only eat one or two cherries per week.

In sum, cherries are a fantastic treat option for most rabbits. They are loaded with antioxidant and anti-inflammatory compounds, lower in calories than many processed treats, and sweet enough to excite any bunny. Just remember that cherries are to be relegated to the very top of your rabbit’s food pyramid—they are dessert, not dinner.

Can Rabbits Eat Corn?   Can I Give My Cat Pedialyte?