Can Rabbits Have Chives?

Though they are not a common choice when we’re searching through the crisper for a healthy, plant-based snack, most of us eat chives in various recipes with some regularity. These herbs, which are actually distant cousins of garlic and onions, are commonly used in order to add the flavor of garlic and onions into a dish—without having to actually drop massive chunks of garlic and onions into said dish. Because of their aesthetic appeal, they often show up raw as garnishes sprinkled on foods such as deviled eggs, potato skins, or savory scrambles. Their strong flavor means that they are not a staple food, but they are still considered a healthy way to flavor your meals without adding a bunch of salt or sugar. But could they be a healthy way to add flavor to our bunnies’ food, too?

Anyone who has ever raised a rabbit is aware of the bland, boring bunny diet; the foods that rabbits eat to sustain themselves are mostly pieces of plant matter that we would consider to be utterly inedible. After weeks of watching your furry friend eat hay and other bland foods for every meal, pity begins to sink in. We want to make their food more exciting in a way that will help their health, not hurt it. But all of the most delicious plant foods, like fruits and starches, have to be given to bunnies in moderation! So, what about flavorful herbs?

Can you give your rabbit chives?

Technically, yes, rabbits can eat small quantities of chives, but it is not recommended for several reasons. There has been very little research done on the effect that chives have on overall health. Some online sources suggest that feeding your rabbit vegetables such as chives and onions may contribute to decreased immunity or ‘blood abnormalities’, but they fail to provide evidence for these claims. Still, chives are pungent herbs that are ill-suited for rabbit digestion, so they may contribute to gastrointestinal distress if fed in large amounts or to particularly sensitive rabbits. But perhaps the best reason to avoid giving your rabbit chives is this: most bunnies hate them! If you want to make your bun’s diet more exciting, offer them less pungent, more palatable leafy greens. 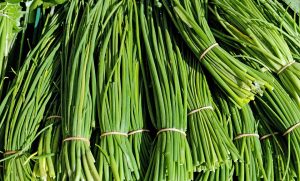 In theory, chives are actually quite healthy foods—we just don’t focus on their nutritional value because we eat them in such small amounts. Like other foods containing allicin, chives have been shown to protect heart health in humans and some other animals; they may be able to help reduce bad cholesterol levels, which can directly lower heart disease risk. Certain chemicals in chives have also been found to lower blood pressure.

Chives are also rich in vitamins and minerals that may support bone and immune system health. They contain high levels of antioxidants that can reduce free radical activity, reducing the risk of diseases like arthritis, insulin resistance, diabetes, and other inflammatory conditions. Antioxidant-rich foods such as chives have even been found to lower the risk of cancer in humans and other animals.

As previously mentioned, due to the lack of long-term rabbit studies, it is hard to say whether or not these health benefits would hold true for our precious pets. It is also unlikely that your rabbit could eat enough chives to reap any of these benefits. There are plenty of tasty, rabbit-friendly foods your bun could eat that would offer the exact same antioxidant and cardiovascular benefits that chives do. There is no real benefit to adding chives into your pet’s diet that you could not get from leafy greens like kale or spinach.

Though your rabbit could probably survive eating a couple bites of chives, this pungent food might wreak havoc on their delicate digestion. Chives are strong, spicy foods that can cause upset stomach, which can lead to gastrointestinal motility problems.

Since rabbits are unable to vomit, any food that upsets their stomach is stuck sitting there until it manages to work all the way through to the other end. In order to do that, though, your rabbit has to be eating enough fiber to stimulate their GI tract to continue functioning properly—which may not happen if your rabbit gets an upset stomach and starts refusing food! If digestion stagnates, the food in their gut can become hardened or impacted, causing a blockage. Gastrointestinal motility problems can also cause bacterial overgrowth in the gut.

Finally, most rabbits do not enjoy the taste of chives, so there is a good chance that any chives dropped into their dish would go to waste. While your rabbit may not die as a result of eating a chunk of chive, they would probably be better off eating something else. There are many other vegetables that are easy on the stomach and just as antioxidant-rich as chives.