Can Rabbits Have Dill?

Face it: rabbits eat boring, bland diets. Even cartoon bunnies, who often lead glamorous lives of adventure, subsist almost entirely on raw carrots. Real rabbits, who live totally on hay and pellets and consider even raw carrots to be treats, have even less appetizing diets. After dropping the same old timothy hay into your rabbit’s dish day after day, it is only natural to feel a little bit guilty. Your dog has the luxury of the occasional table scrap or dental chew, but your bun is so fragile that you are afraid to give them anything other than hay.

Because the perfect diet is so crucial to keeping our rabbits healthy and happy, it can be difficult for us to find ways to treat them (and to give them a little variety!) without putting their fragile digestion at risk. Rabbits are grazing herbivores, though, and many of us know that leafy greens are considered healthy in moderation. Some of the most flavorful greens available to us are herbs, including dill. But many online sources warn against the dangers of certain herbs. So, is dill considered one of the safe ones?

Can you give your rabbit dill?

The answer is yes, rabbits can consume fresh dill in moderation. There are many flavorful spices and herbs that are dangerous for our furry friends, but dill does not contain any chemicals that are thought to be toxic to rabbits. Unlike a few other vegetables, dill is safe enough to be consumed fairly regularly—there are no known cases of toxicity developing over time. If your bun absolutely adores dill, they can eat it on a regular basis as long as they are also consuming enough hay. 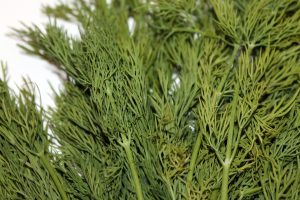 That last sentence is the most important thing to remember. Even though dill and other herbs are perfectly safe for your rabbit to eat, they are not suitable substitutes for hay. In moderation, however, they often make some of the best treats!

Dill and other herbs are probably the best treats you can feed a healthy rabbit. They are low in calories, low in fat, fairly high in fiber, and full of micronutrients that may give your bunny’s health a boost. While most of the processed rabbit treats sold in pet stores are nutritionally empty and loaded with sugar, dill is packed full of vitamins, minerals, and antioxidants that make it a great dietary supplement. The antioxidants present in dill and other herbs are one of the best defenses your bun has against dangerous, highly charged particles called free radicals.

Free radicals react with pretty much any particles they come near. When they exist within your rabbit’s body, unfortunately, the particles tend to be rabbit body cells; when they react with the particles that make up your bun’s cells, they cause damage. Most of the time, the damage done by free radicals is relatively harmless in the grand scheme of things—after all, every cell inside their body is programmed to die before it sustains too much damage. Sometimes, though, free radicals cause damage to DNA within the cell, resulting in genetic mutations that can lead to disease.

Free radical damage has been linked to many chronic and life-threatening diseases, including arthritis, heart disease, diabetes, many types of cancer, and even the normal physical and psychological decline we associate with aging. Some studies suggest that antioxidants may have the ability to neutralize (or disarm) free radicals, which prevents them from damaging body cells. Treating your rabbit to foods that are rich in antioxidants may help keep free radicals in check, decreasing their risk of illness and inflammation.

Dill is also an excellent choice because of its high fiber and low calorie content. Though we consider fruits and starchy vegetables to be healthy, they are actually considered junk food for bunnies; they have too little fiber and too much sugar. Dill, on the other hand, is well-suited to the rabbit digestive system. Bunnies rely on fiber to keep food moving through their gut in a timely manner.

If they consume too many sugary foods (even fruit!), rabbits may suffer from gastrointestinal motility problems. These herbs have a strong flavor that will feel decadent to your rabbit without also exposing them to too much sugar, which will keep their digestion working properly.

Dill is not, however, a replacement for hay—it does not have enough indigestible fiber for your rabbit to live on. The vast majority of your furry friend’s calories need to come from fresh hay, with leafy greens like dill serving as healthy supplements to their main meals. If your rabbit’s fecal pellets change in appearance (if they become harder, softer, strangely colored, or if they start producing more of them), reduce the amount of herbs you are feeding them and focus on hay and water until their digestive system sorts itself out. Any time you introduce a new food to your bun, do it slowly.