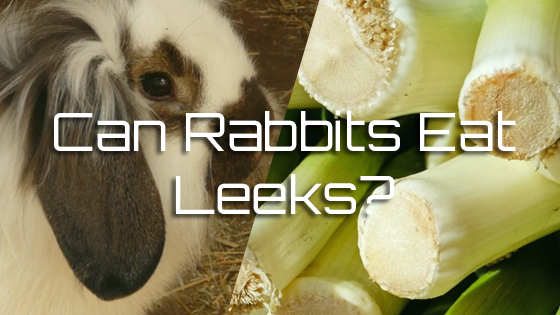 Can Rabbits Have Leeks?

Because we have spent our lives listening to nutrition advice geared towards humans, we often make dietary mistakes when it comes time to feed our pets. This is especially true if those pets are vastly different from ourselves. Dogs, who are some of our most popular pets, often get lucky—after evolving by our side for thousands of years, they have developed the ability to stomach many of the same foods that we do. Unlike many other companion animals, dogs are often able to digest the starches us humans have relied on for years. If your companion critter is anything other than a dog, however, it is much easier to make mistakes.

When we adopt our first rabbit, we may be astonished to learn that they can’t actually live on carrots and lettuce. Most of what they eat is a food we often attribute to horses: hay. Responsible rabbit parents make sure that their furry friends eat large amounts of hay every single day, with other foods serving as tasty supplements or rare treats. We know that our rabbits can handle mild foods like broccoli, cabbage, and strawberry tops, but what about the more aggressively flavored vegetables? Many people like to cook with leeks, so they may find that they have some leftovers on their hands.

Can you give your rabbit leeks?

The answer may surprise you: no, rabbits should not eat leeks. While online sources disagree about just how dangerous this food can be for rabbits, the general consensus is that it is a bad idea to feed them leeks in any quantity. If your furry friend eats a tiny portion of leek, they will probably be okay—this food does not seem to be poisonous, so it is unlikely that accidentally consuming a little bit of leek will kill your bunny.

Risks of Feeding Your Rabbit Leeks?

That said, leeks are still unhealthy for bunnies. If you feed this food to them regularly or in large quantities, they may develop gastrointestinal motility problems and nutritional imbalances. If you’ve got some leek scraps sitting in your crisper, keep them away from your bunny. There are much healthier vegetables you can feed your furry friend, including kale, celery, spinach, and radish tops.

Leeks are related to garlic and onions, so they have a strong flavor that may seem like a good way to spice up your bun’s diet. They are also chock full of B vitamins, which we know will support a healthy brain and cardiovascular system, as well as antioxidants, which are often praised for their powerful protective effects. Both of these are big pluses for leeks.

Antioxidant-rich foods make excellent dietary supplements for healthy rabbits whose parents want to reduce their furry friend’s risk of developing arthritis, heart disease, and even many types of cancer. The antioxidants in leeks and other bulbs have even been shown to help slow the general decline we associate with aging. These polyphenols can keep us and many other animals young by fighting against stiff joints, memory loss, and dementia.

Antioxidants are great, but leeks are not the way to get them into your bun’s diet. Rabbits enjoy many of our favorite fruits and vegetables, but they actually have very different dietary needs. Their digestive systems are set up to handle foods that are dramatically different from the ones we can consume regularly (including leeks). Rabbits have evolved to eat diets extremely high in fiber and extremely low in sugar. They actually have a special pouch, called the cecum, that helps them process fiber. Inside this pouch (which is the biggest part of their digestive tract), the indigestible fiber is mixed with bacteria and begins to ferment. The fermentation process unlocks the nutrients within the fiber.

The presence of large quantities of fiber inside the stomach and cecum is what keeps food moving through in a timely manner. When the fiber they ate presses against the walls of their stomach and cecum, it sends a signal to the brain that causes the muscle contractions that push waste out of the body.

Leeks do a bad job of this—they do not contain enough fiber, and they contain too much sugar. If your bun eats a substantial amount of leeks, they will almost certainly suffer from bloating, stomach ache, and other digestive problems. Rabbits who experience bloat and upset stomach often refuse to eat or drink, which can exacerbate stomach problems. If they are not eating enough hay, their digestive system may actually shut down. If you have given your rabbit leeks and they have developed stomach problems, try feeding them strictly hay and water. If they refuse to eat, or if they haven’t had a bowel movement in 12 hours, see a veterinarian.

In the end, leeks are best avoided. They offer little in the way of the fiber your bun needs to thrive, and they are often quite hard on the digestive system. Don’t panic if you’ve already given your bun a bit of leek, but do your best to make sure that it doesn’t become a habit.