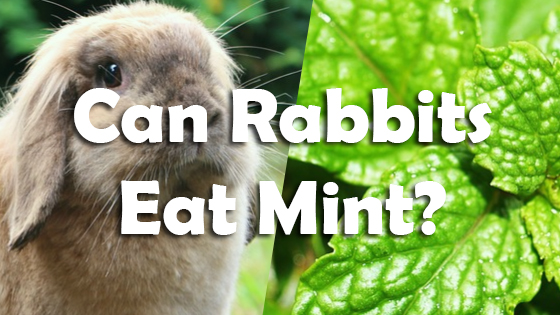 Can Rabbits Have Mint?

Those of us who adhere to the Standard American Diet are not as familiar with herbs and spices as those who hoard cookbooks and binge watch culinary shows, but there are a handful of herbs that all of us eat at least semi-regularly. One of the most popular herbs is mint. We like to eat minty sweets during the cold winter months, but many people utilize this flavorful her in other ways year-round. Fans of mint like to keep this herb on hand to add flavor and nutrition to greek yogurt, smoothies, salads and fruit salads, quinoa-based dishes, fruit popsicles, and even steeped in hot water to make a delicious cup of herbal tea.

For those of us who share our homes with veggie-eating bunnies, anything green and leafy starts to look like rabbit food. However, many online sources talk about the dangers of feeding rabbits certain herbs. Plants such as buttercup, mistletoe, jasmine, and even the innocent-seeming aloe can seriously harm our cotton-tailed companions. We have learned to be careful. So, should we share our favorite herb with our rabbits?

Can you give your rabbit mint?

The answer is yes, rabbits can eat small quantities of mint as a part of a balanced diet. Fortunately, mint is one of a handful of herbs that does not appear to be in any way toxic to rabbits. This herb is also usually pretty well-tolerated by most rabbits, so your bun will probably be able to start eating it without suffering from upset stomach or diarrhea. Mint also happens to be a leafy vegetable that is low in oxalic acid, so it can be consumed regularly. So, if you’re looking to spice up your bun’s diet, toss them a few mint leaves. As long as they do not make up a large part of your rabbit’s diet, they should be perfectly healthy. 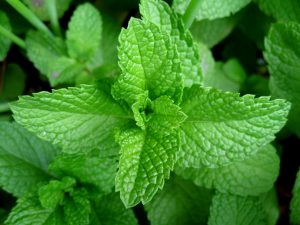 Mint leaves are not particularly dense sources of nutrition for your bunnies, but they do contain small amounts of important vitamins and minerals, including potassium, iron (which can help prevent anemia), and Vitamin A. As a leafy green vegetable, this herb also contains a moderate amount of dietary fiber, which is a crucial component of the rabbit diet. Because mint is high in fiber yet low in calories and sugar, it is an excellent way to add flavor to your rabbit’s diet without the added risk of the sugars found in fruits and other flavorful treats.

Like other herbs, mint is also loaded with antioxidants that can protect your rabbit’s health in the long term. Consumption of antioxidant-rich foods such as mint have been found to correlate with a decreased risk of many chronic and life-threatening diseases in many animal species, including rabbits and other small animals. This is because antioxidants neutralize highly charged, highly reactive metabolic waste products called free radicals.
Free radicals are completely natural, but they are also remarkably volatile. Because of their strong charge, free radicals often steal electrons from the other particles that they come close to. Inside of a body, most of these particles end up being bits and pieces of body cells. By stealing electrons from particles inside of DNA, they cause mutations that can result in disease. Sometimes, free radical activity is completely harmless— either the mutation itself is harmless, or the cell dies before it can pass on a more dangerous mutation.

Sometimes, though, free radical activity results in mutations that can result in disease. Free radicals have been implicated in the development of ailments such as arthritis, skin problems, memory loss, behavioral problems, and even cancer. Supplementing your rabbit’s diet with antioxidant-rich foods, including mint, may reduce their risk of inflammation and illness. Unlike antioxidant supplements sold in stores (tablets, capsules, etc), mint and other herbs appear to be safe and effective ways to boost your bun’s antioxidant intake.

Mint makes an excellent side dish, but your rabbit’s diet should consist mostly of hay and grass. Mint and other herbs can’t supply most of your rabbit’s nutrition—if your bun doesn’t get enough hay, they will likely suffer from nutritional imbalances and other health problems. Hay is an important source of dietary fiber, which the rabbit gastrointestinal tract relies on to function properly.

If you notice your rabbit is refusing food and water, straining during bowel movements, or producing small, discolored, or oddly-shaped stools, decrease the amount of leafy greens they are consuming and focus on hay. If problems persist, take them to see a veterinarian. Digestive problems can progress to gastrointestinal stasis, which can be painful and even fatal.

Overall, mint is an excellent herb to include in your rabbit’s diet. It is flavorful, low in calories, and high in antioxidants that may combat many chronic diseases. However, mint should be treated as a side dish, not a staple. Your rabbit should eat mostly hay, with small amounts of leafy greens and other vegetables on the side.