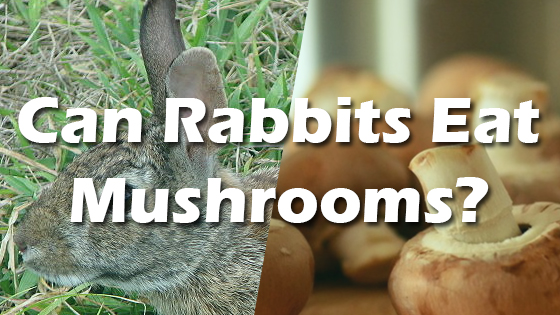 Can Rabbits Have Mushrooms?

Most of the produce we consume falls into one of two categories: fruits or vegetables. Though there is room for argument as to which of these two categories certain plant foods fall into (tomatoes, cucumbers, and avocadoes certainly seem like vegetables, but are actually fruits!), we generally find it easy to sort them into one of these two categories. When it comes to produce, the odd man out is the mushroom, which hardly seems like either a fruit or a vegetable. They do not have the sweet, juicy quality of a fruit, and they do not have the satisfying crunch of a vegetable, but they sit in the produce aisle with all our other favorite pizza toppings.

Mushrooms are weird because they aren’t even part of the same kingdom as the rest of our produce list! Mushrooms are fungi, cousins of yeasts and molds. If we have rabbits, this poses a problem for us: are these pieces of produce safe even if they aren’t technically plants, or should we keep them far away from our herbivorous pets? Most online sources suggest that rabbits should eat plants exclusively. Is this a hard role, or can we lump fungi in with plants?

Can you give your rabbit mushrooms?

The answer is no, rabbits cannot eat mushrooms of any kind or in any quantity. Though mushrooms and other fungi vary widely in toxicity (some mushrooms are strong enough to kill humans in tiny quantities, while others probably would not even cause any immediate harm to your bunny), it can be very difficult to tell which ones are poisonous and which ones are not. This is complicated by the fact that humans can handle certain toxins that rabbits cannot—which means that even mushrooms that are totally safe for people could kill a rabbit. To top it all off, mushrooms are not a nutritionally adequate food for rabbits. Whether button or Portobello, cooked or raw, you should keep your mushrooms away from your rabbit. 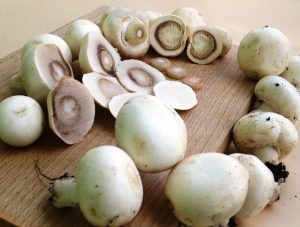 There is a reason why mushrooms are considered superfoods for people. These fungi are rich in many of the nutrients we need to thrive—many types of mushrooms contain loads of B vitamins, zinc, and other minerals. They also offer more protein than many of the other produce items we consume regularly. Mushrooms are often praised for supporting immunity, fighting cancer, and helping to build strong bones. Unfortunately, these health benefits appear to be limited to people.

There are no benefits to giving your rabbit mushrooms of any kind. Whether they are shiitake mushrooms you bought from the store or toadstools growing in your backyard, whether they are cooked or raw, they are not beneficial to rabbit health. Mushrooms are simply not suitable foods for rabbits, who have evolved to subsist on large quantities of high-fiber plant foods.

The best foods for your bun are hay, grass, and fiber-rich leafy greens—vegetables in the plant kingdom. Rabbit nutrition relies on large amounts of dietary fiber; the largest part of their gastrointestinal tract is a big chamber called the caecum, which serves as a pouch where fiber is mixed with gut bacteria until it ferments. The fermentation process converts dietary fiber into various vitamins, minerals, and amino acids that your rabbit can absorb and use to meet their daily nutritional needs.

In addition to providing nutrients, dietary fiber plays a key role in the mechanics of the digestive process. The presence of fiber in the gut is what triggers digestion—as your rabbit eats more fiber-rich foods, they stimulate the caecum and the stomach, which will empty to accommodate more food. Rabbits who eat large amounts of foods that are low in fiber (such as fruits, starches, and non-plant foods) often experience sluggish digestion.

Mild gastrointestinal motility problems are common and easily rectified by fixing your rabbit’s diet, but mild GI problems can quickly become severe if your rabbit is not eating the right foods. In severe cases, rabbits may develop a condition known as gastrointestinal stasis—total shutdown of the GI tract. Left untreated, GI stasis is fatal. If your rabbit has gone 12 hours without producing any fecal pellets, seek veterinary care as soon as possible.

The best reason to avoid giving your bun mushrooms, however, is the potential for poisoning. Many types of mushrooms are toxic to rabbits. Rabbits are unable to vomit, so consuming toxic substances often causes sudden death. Studies performed in mice also found that mushrooms contributed to an increased risk of cancer. We are not sure whether or not these results apply to rabbits, but it’s best to air on the side of caution.

In conclusion, mushrooms of any kind are not a suitable food for rabbits. They are nutritionally inadequate and potentially poisonous. If your rabbit eats the wild mushrooms growing in your yard, it would be wise to take them to the vet.