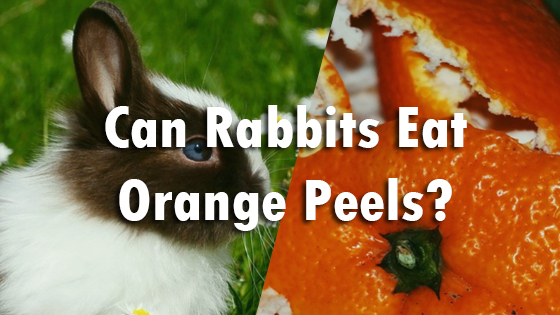 Can Rabbits Have Orange Peels?

One of the nice things about companion animals is the fact that they are often eager to eat unwanted scraps of produce. Dogs are the most well-known leftover-loving pets, but many rabbit parents have discovered that their bunnies are more than happy to devour carrot tops, wilted spinach, and other imperfect bits of plant foods that would otherwise wind up in the trash. However, those of us who have rabbits have learned that we have to be a little more cautious than the average puppy parent. Dogs are pretty sturdy and will usually just throw up whatever foods don’t sit well with them, but our rabbits don’t have that luxury.

So, what are we supposed to do with our most difficult-to-use produce scraps? During citrus season, fruit lovers often find themselves overwhelmed with heaps of orange peels and few ideas of what to do with them.

Can you give your rabbit orange peels?

The Internet is full of conflicting information regarding the safety of orange peels. The answer appears to be this: yes, your rabbit can eat orange peels in small quantities. Though some sources insist that orange peels should never be fed to rabbits, it is doubtful that this food will actually cause any serious harm to your bun. 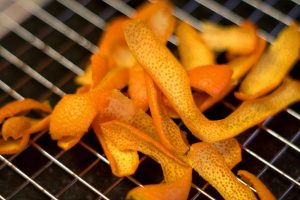 Unlike cats and dogs, rabbits seem to tolerate orange flesh and juice quite well, so there is no real risk of toxicity associated with eating fresh, washed orange peels. There is some thought that orange peels may actually be a better choice than orange flesh. Feel free to experiment with orange peels in your rabbit’s diet, but always monitor them for changes in their eating or toilet habits following the introduction of a new food.

Why in the world would orange peels be more healthful for your rabbit than juicy orange segments? Though we gag at the idea of eating orange peels, they are actually far more suited to rabbit digestion than orange flesh—and they contain higher amounts of some important nutrients and phytochemicals that may protect overall health. Compared to pulp, orange peels boast higher concentrations of flavonoids, Vitamin C, calcium, magnesium, Vitamin A, and several B vitamins.

Though Vitamin C can help support your rabbit’s immune system and energy levels, and Vitamin A plays a key role in maintaining eye health, the large amount of flavonoids in orange peels are probably their strong point. Studies in rabbits are somewhat limited (we tend to do most of our scientific research on mice), but the flavonoids found in orange peels may have powerful protective effects—some studies suggest that flavonoids can inhibit certain proteins that have been linked to obesity and cancer.

Partly because of their ability to fight obesity, these flavonoids may also protect against diabetes and cardiovascular disease. One study performed on rabbits observed that those who drank orange juice experienced a large reduction in cholesterol levels. That said, if your rabbit is suffering from high cholesterol, supplementing their diet with orange peels will not be enough to protect their heart health! If you suspect that your rabbit has any form of chronic illness, seek veterinary help before you begin adding new foods to their diet.

Another reason why orange peels may be better treats than orange pulp is the high amount of fiber—the peel has roughly four times the amount of fiber found in the flesh! Fruit is often dangerous to rabbits because it contains a lot of sugar and very little fiber, but orange peels contain much more fiber and much less sugar. This is important not only to reduce their chances of becoming obese, but to protect against gastrointestinal stasis.

Most of us could probably stand to eat a little more fiber, but our rabbits literally can’t go without it—too little fiber causes their gastrointestinal system to shut down. If your rabbit eats too much sugar and too little fiber (even fruit sugar!), their stomach and cecum cannot empty properly. This causes your rabbit to refuse food and water, which further slows digestion. The contents of your rabbit’s cecum can become hardened and impacted, which can result in gastrointestinal stasis. This condition requires emergency care and can be fatal.

Though orange peels are more fibrous than many other fruity treats, they still are not an adequate source of nutrition. Most of your rabbit’s diet should consist of fresh hay. Most rabbits should not eat more than a quarter of an orange peel a few times a week.

There is some debate as to whether or not orange peels are an ideal treat for your bun, but most sources agree that they are relatively safe when given in small quantities. Orange peels are high in flavonoids, fiber, and vitamins, yet lower in sugar than orange pulp, which makes them a more rabbit-friendly food than many other fruits. Just remember to wash them!

Can I Give My Cat Activated Charcoal?   Can Rabbits Eat Mint?