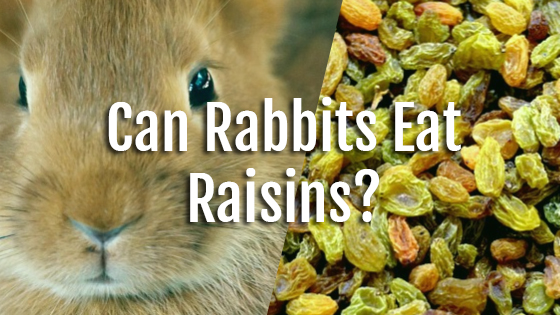 Can Rabbits Have Raisins?

Raisins: you either love them or you hate them. While many of us remember gobbling up tiny boxes of raisins along with our cups of applesauce as children, other people remember methodically removing the little chunks of fruit from their ants-on-a-log and their bowls of Raisin Brain. Though many people hold oatmeal raisin cookies in deep disdain, they remain among the most popular forms of dried fruit. They are delicious, calorically dense, and easily portable, which makes them a great source of nutrition for hikers, runners, and other athletes. Perhaps their biggest asset (aside from how perfectly they pair with raisins) is their ability to satisfy our sweet tooth and nourish our bodies—at the same time!

These fruits seem quite innocent, so many of us are shocked to discover that even a small quantity of them can poison our pets. The Internet is full of warnings against feeding raisins to cats and dogs, but what about rabbits? Rabbits are herbivorous creatures who seem to adore fruit of all kinds, but many pet parents have learned to fear anything that looks like a grape. Should we keep this fruit from anyone with four legs, or can we treat our rabbits to a couple of raisins?

Can you give your rabbit raisins?

The answer is yes, rabbits can eat small quantities of raisins as treats. While this food is extremely dangerous for dogs and cats, it does not appear to pose any risk of toxicity to rabbits—if you’ve already given your bunny a palm full of raisins, you probably do not need to rush them to the animal hospital. However, raisins are far from being a bunny health food, and pet parents would be wise to limit their rabbit’s portion sizes. There are no real health benefits to feeding your rabbit raisins, but there are a lot of potential risks, so you may want to opt for a more rabbit-friendly treat. Two or three raisins once or twice a week shouldn’t cause any problems, but feeding them more than that can have a negative impact on their health. Just make sure the raisins you give your bun do not have added sugar! 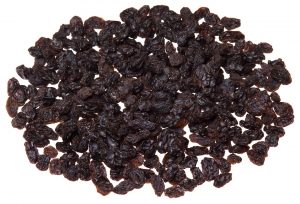 Raisins may be dessert for rabbits, but they are not totally without nutrition. These dried fruits contain both potassium and iron. Potassium plays a key role in cardiovascular health by fighting high blood pressure and reducing the risk of heart disease, while iron ensures that oxygen is able to circulate throughout the entire body.

Raisins, like most fruits, also have antioxidants, which may reduce the risk of disease for rabbits and other animals. Antioxidants are thought to protect against disease by protecting against the effects of dangerous metabolic waste products called free radicals. Free radicals, which carry a high charge, are present inside your bun’s body at all times (they are inescapable!). Their high charge makes them extremely reactive—and, unfortunately, the particles they react with tend to be the ones that make up your bunny’s body cells.

Many of these reactions are relatively harmless, but some of them lead to genetic mutations that can cause disease. Free radical activity is believed to contribute to nearly every one of our most-feared chronic diseases, including heart disease, cancer, arthritis, and other inflammatory conditions. Antioxidants like those found in grapes can reduce the numbers of free radicals in the body, which can protect body cells and lower your furry friend’s risk of disease.

Herbivores do not all have the same dietary needs. While fruit bats and other animals often thrive on high-fruit diets, rabbits have a very low tolerance for sugary foods like raisins. Rabbits have evolved to eat predominantly cellulose in the form of hays and grasses. Without consuming large quantities of indigestible fiber, their gastrointestinal tract can’t run properly! Feeding your rabbit high-sugar, low-fiber foods like raisins can cause digestive problems that may result in severe gastrointestinal motility issues.

Finally, raisins should be fed sparingly to rabbits because they are calorically dense. Bunnies have very low calorie needs, so the extra calories in raisins and other dried fruits can add up quickly. If you make a habit of letting your rabbit snack on raisins, they can easily wind up overweight or obese. Rabbits who already have weight problems should avoid fruit of any kind.

Overall, it is probably better to avoid raisins—they are too high in sugar and calories to make healthy staples—but feeding your rabbit one or two raisins every once in a while will not cause any problems. As long as the raisins in question have no added sugars and are fed sparingly, they are generally considered safe bunny treats.