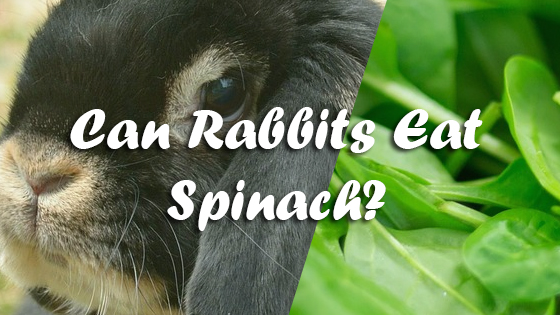 Can Rabbits Have Spinach?

In recent years, kale has stolen our hearts as the superfood of choice. A trip into the health food store reveals a wide range of kale products—you can get kale chips, kale juice, kale salad, and a wide range of other processed snack foods made using kale that are marketed to the health-conscious among us. But before kale there was spinach, the favorite food of Popeye and of generations of parents who wanted their kids to eat their daily dose of green leafy vegetables. Even if spinach is not as trendy as kale, it is just as beloved. Spinach is the green leafy vegetable of our childhoods. It’s mild in flavor, easy to mix into smoothies and salads, and generally pretty affordable.

We know that spinach is great for us, but can we give it to our rabbits, too? All of our favorite cartoon rabbits live on salad staples. Most of us grew up watching animated rabbits who ate carrots, cabbages, and broccoli for breakfast, lunch, and dinner, so it seems like spinach would be a perfect option. But a quick Google search reveals that many pet parents are concerned about something called oxalic acid! So, how safe is our favorite green leafy vegetable for our pets?

Can you give your rabbit spinach?

The answer is yes, rabbits can eat spinach in moderation. Spinach is totally safe for our furry friends—it doesn’t contain any chemicals that can cause toxicity, so there is nothing dangerous about letting your bun gobble up a couple of baby spinach leaves on a regular basis. In fact, spinach is one of the best supplementary foods you can include in your rabbit’s diet! Though most of your rabbit’s diet should be alfalfa or timothy hay, including spinach and other leafy greens is an excellent way to fortify their bodies against injury and illness. Just make sure that spinach and other salad staples are side dishes, not the main meal!

As our dieticians love to tell us, spinach is a highly nutritious food, and many of the same nutrients that help our health can benefit our bunnies’ bodies, too. Spinach is so full of micronutrients that it might as well be considered nature’s multivitamin: this veggie is loaded with Vitamin K, manganese, Vitamin A, folate, iron, copper, magnesium, Vitamin E, Vitamin C, calcium, and a range of B vitamins, plus dietary fiber and countless antioxidants. Including spinach and other leafy greens in your rabbit’s diet can help keep them healthy and happy for as long as possible.

Spinach is a great food for rabbits because it is low in calories, yet loaded with micronutrients. Unlike humans, who are omnivores who thrive on starchy foods, rabbits have evolved as grazing herbivores—they are biologically set up to eat large quantities of high-fiber, low-calorie foods, including green leafy vegetables. One of the biggest health benefits of spinach is the rich antioxidant content.

The antioxidants in spinach help support health by protecting against particles called free radicals, which show up in the body as natural waste products from the metabolic processes that keep your bunny functioning properly. Free radicals are not poisonous, per se, but they are highly reactive. This means that they have a nasty habit of ‘stealing’ electrons from the atoms that they bump into—and, unfortunately for your rabbit, the atoms that they bump into usually belong to body cells! Sometimes, this electron theft is relatively harmless. Often, however, free radical activity can cause cell damage and genetic mutations that later lead to inflammation and disease. Many of our most-feared diseases, including diabetes, arthritis, heart disease, and even some cancers, have been linked to free radical activity.

This is where antioxidants come in. Antioxidants are unique particles that have the ability to ‘donate’ electrons to free radicals without becoming free radicals themselves—this means that they can stabilize free radicals and prevent them from stealing electrons from delicate body cells! This is why supplementing your bun’s diet with antioxidant-rich foods may be able to lower their risk of developing chronic or life-threatening diseases as they age.

Spinach’s anti-inflammatory compounds can protect against disease, but they may also be able to alleviate the symptoms of existing illness. Foods that combat inflammation may be especially beneficial for inflammatory diseases like arthritis. By reducing inflammation, spinach and other anti-inflammatory foods can relieve joint swelling, decrease pain levels, and even improve joint mobility. Spinach certainly is not a substitute for proper veterinary care, but a diet rich in foods like it may be able to help ease your arthritic pet’s aches and pains. Just make sure to check with a vet before you alter your bun’s diet in any way.

Its low calorie content (and moderate amount of fiber) are good for rabbits, too. Though ideal bunny foods should be even higher in fiber, spinach has enough to be considered ‘safe’ for bunnies in moderation. Leafy greens are one of the best sources of antioxidants for rabbits because they are much lower in sugar than fruits, sweet potatoes, and other colorful, caloric plant foods. Feeding your rabbit fruits regularly (even if they’s antioxidant-rich berries!) is likely to cause weight gain and digestive problems, but dark leafy green vegetables are much lower in sugar and much easier on their fragile gastrointestinal tract.

Even though spinach is great in moderation, it’s important not to give your rabbit too much of it. Bunnies should not eat salad for dinner. Your rabbit should eat mostly hay; feeding them too much spinach can cause nutritional imbalances and digestive problems. If your bun produces fecal pellets that are runny, misshapen, or strangely colored, give them fewer leafy greens and more hay. In addition, spinach is high in oxalates, which may cause health problems if they build up in your bun’s body. The best thing you can do for your rabbit’s health is feed them mostly hay, and to supplement with spinach alongside other leafy greens, which will help prevent them from eating too many oxalates. After all, variety is the spice of life.