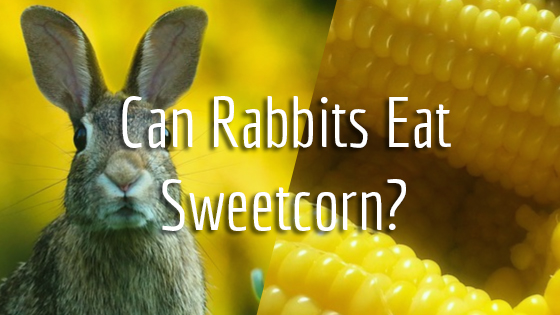 Can Rabbits Have Sweet Sweetcorn?

Though it is technically a vegetable and a grain, sweetcorn seems to fall into its own food group. Corn has been a staple in certain parts of the world for centuries—it is starchy, high in energy, and easy to grow and prepare, which made it a practical source of calories for populations who fed themselves by farming. Today, corn has made its way into nearly every aspect of our lives. Field corn, which is harvested long after the kernels have dried out and lost their sweetness, is used to sustain the livestock that become our burgers. It can also be made into fuel, makeup, and other personal products.

Sweetcorn, on the other hand, is meant for human consumption. Though the rise in GMOS has led some to decrease their consumption of corn and corn-based products, there is no evidence that GMO corn harms human health, and most of us are perfectly comfortable enjoying it. Corn is mild and fairly easy on the stomach, so many of us would think nothing of using it as a treat for our furry friends. However, many pet parents have heard bad things about corn and pet food. Is there any truth to these claims?

Can you give your rabbit sweetcorn?

While sweetcorn (genetically modified or not!) is a perfectly good food for humans, it is not recommended for rabbit consumption. In an ideal word, your rabbit would not eat any sweetcorn whatsoever. This food is not poisonous to pets, so you do not need to rush your bun to the vet if you’ve been feeding them corn, but it can cause serious health problems if consumed regularly or in large quantities. Sweetcorn is neither safe nor nutritious, so you should avoid giving it to your rabbit in any amount. There are much safer, healthier treat options for your rabbit. 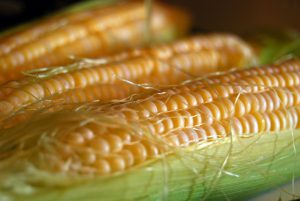 Corn is often used as an efficient source of energy for active (or budget-conscious) humans, but there are no potential health benefits of giving this food to your rabbit. While we thrive on diets that include starchy carbohydrates (including foods like potatoes, corn, and other whole grains), rabbits do not. The ideal rabbit diet does not contain the energy-rich staple foods, like beans, rice, and corn, that many of our ancestors relied upon for survival.

Rabbits are herbivores with unique, fragile digestive systems that are indicative of a very particular diet—unlike people, dogs, and even other herbivores, bunnies have evolved to eat large quantities of high-fiber, low-sugar foods such as grass and hay. The biggest part of the rabbit digestive system is an organ called the caecum, which serves as a specialized pouch that holds fiber until it ferments. The fiber is separated from the other, more easily digestible parts of their food and mixed with bacteria that release many of the nutrients your bun needs to thrive.

In addition to providing nutrition, the dietary fiber in grass and hay stimulate the digestive system to move food through the body. When your bunny eats fiber, it ‘wakes up’ their gastrointestinal tract, causing the caecum and the stomach to empty in order to make room for the new food. If the food that your rabbit eats is high in starch or does not contain enough dietary fiber, it may fail to stimulate the GI tract, which means that the caecum and stomach do not empty as quickly as they should.

As a result of inadequate fiber intake, rabbit digestion stagnates. If matter is left sitting inside the GI tract for too long, it can harden and become impacted, plugging up the plumbing. Corn kernels, which are surrounded by a completely indigestible sleeve called the hull, can cause this problem even if your bun is adequately hydrated.

If digestion becomes sluggish, it can become a dangerous condition called caecal hypomotility. Bunnies affected by this condition may show symptoms such as loss of appetite (which will only worsen the condition), lethargy, a bloated or distended belly, stomach pain, infrequent bowel movements, straining during bowel movements, low body temperature, or weight loss. Gastrointestinal motility problems can be life-threatening, so, if you suspect your rabbit has a blockage, it is important to take them to the vet as soon as possible.

Poor diet is one of the leading causes of health problems in rabbits. One of the best things you can do to ensure your bun’s gastrointestinal tract continues to run smoothly is to avoid feeding them starchy, difficult-to-digest foods like corn, which offer no nutritional benefits and plenty of health risks. If you have already given your bun some corn, increase the amount of hay available to them, give them plenty of water, and avoid feeding them any other starchy or sugary foods for a day or two to ensure things continue to run smoothly. There is no reason to give your bun sweetcorn!