Can Rabbits Have Tomatoes?

Most produce falls neatly into either the ‘vegetable’ or ‘fruit’ category, but there is one bright and juicy food that inspires full-blown arguments over which food group it falls into: the humble tomato. Though our smug, science-loving cousins love to remind us that tomatoes are actually fruits, we salad enthusiasts will go to our graves insisting that they are functionally vegetables. After all, we would never drop a tomato into a fruit salad. We would never use tomato juice interchangeably with apple or orange juice.

Tomatoes, to us, are vegetables—and, since vegetables are the quintessential rabbit food, it seems only reasonable that we could feed them to our furry friends to help break up the monotony of their dry, dull, hay-based diets. We know we probably can’t give our bunnies macaroni and cheese or ice cream sundaes, so watery, refreshing tomatoes seem like the healthiest way to add some variety to their diet. But is this really safe? Are tomatoes really fruits or vegetables?

Can you give your rabbit tomatoes?

There is good news and there is bad news, salad enthusiasts. The good news is that rabbits can eat fresh tomatoes as treats. The bad news is that, because tomatoes really are fruits, they can’t eat them as staple foods. We would never think of tomatoes as desserts, but for rabbits, that’s exactly what they are—they are quite high in sugar (by bunny standards), yet low in the fiber that they need to keep their digestion running smoothly. 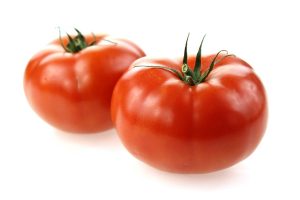 So, while your bun may be able to handle a little bit bigger portion of tomatoes than starchy fruits like bananas or mangoes, for the most part, you should treat tomatoes the way you would treat any other food. Tomatoes are a great, safe way to treat your bun, but they shouldn’t have an important place in the rabbit food pyramid.

Even aside from the fact that we use them as vegetables, tomatoes are pretty remarkable fruits. As their brilliant red color suggests, they are full of vitamins, minerals, and phytochemicals that slow aging, reduce inflammation, and fight cancer. Tomatoes have become somewhat famous for their high levels of antioxidants. They are most often praised for a specific antioxidant, a carotenoid called lycopene.

Lycopene appears to be a particularly powerful antioxidant, but it works in much the same way as most other antioxidants. There has not been much research on the impact that tomatoes and other antioxidant-rich foods have on long-term health for rabbits, but the short-term studies that have been performed on rabbits and other animals suggest that eating large amounts of antioxidant-rich foods can help protect against cancer, heart disease, diabetes, arthritis, infection, and chronic inflammation.

By giving your rabbit antioxidant-rich treats in place of junk food (which includes highly processed corn-based ‘rabbit treats’ sold in stores), you may be able to provide them with a boost that can lower their risk of developing a wide range of diseases. That said, it is unlikely that your bun can safely consume enough tomatoes to make a dramatic impact on their health—tomatoes are only helpful if they are fed to your rabbit in the context of an overall healthy diet. If your bun regularly eats crackers or table scraps, giving them a slice of tomato will probably not offset the harm that those foods have done! Most of the health issues that domesticated rabbits deal with are the result of poor diet.

It is also worth noting that too many tomatoes can do more harm than good. Though tomatoes are lower in calories and sugar than many other fruits, they still are not ideal foods for rabbits. Compared to hay, which is the ideal rabbit food, tomatoes contain too much sugar and water and not nearly enough fiber. Overeating tomatoes once is not likely to kill your rabbit, but if it becomes a habit, your bun can develop serious gastrointestinal problems.

The rabbit gastrointestinal tract relies on fiber to keep moving—the presence of fiber in the gut is what stimulates the stomach and the cecum to empty. If your rabbit eats a lot of low-fiber foods like tomatoes, these parts of the digestive tract may not empty in a timely manner. This will cause your rabbit to feel full, which can result in them refusing to eat or drink. Over time, the matter in their gut may become impacted. This can cause gastrointestinal stasis, infection, and even death. If your rabbit’s fecal pellets change in number, size, or texture, lay off the fruit and stick to hay.

In conclusion, tomatoes are a safe treat for healthy rabbits, but they should not serve as dietary staples. Though they are loaded with antioxidants and other vitamins, they are not suitable rabbit food. Your rabbit should eat mostly hay—they can only handle about two tablespoons of fruit (including tomatoes) every day.